June 17, 2011
You know you love it when I recap my long runs. Especially since I do most of them on the treadmill, so the pictures are limited to Millie and me. If you get too bored reading about last night's 12, you can skip back to yesterday's post and enter my Gotein giveaway.

Anyhow...I started running after I got my girls to bed. I had my iPod Touch ready to go in case I got bored and needed Netflix to get me through, but the Touch went untouched. My tunes got me through, mostly thanks to the new ones. Some of my new favorites, and I must admit I am surprised, are:

A few weeks ago, I went shopping for a bra that I can wear by itself (as motivation sort of to get the abs I want) that will make it look like I have two boobs instead of just one. I loved the Moving Comfort Juno, but they didn't have the color I wanted (pink, of course) in my size. Just a few days later, I won a giveaway for a Moving Comfort bra of my choice from Laima at Women's Endurance Gear. I was soooo excited. Of course I chose the Juno in pink. The bra arrived yesterday, but it was blue. They were out of pink in my size. I was a little worried the blue would blend in too much with my pale skin, but I was pleasantly surprised when I put it on for my miles last night. 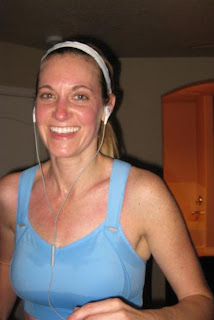 I rarely run in just a sports bra on top. Even at home, I am too self conscious. But it is getting hot here, and I knew I would be on Millie for a while, so I figured I would give my new bra a test drive. After I put it on, I was a little worried about the stitch at the center of the front that makes it a slight v-neck. Maybe if my ta-tas were bigger, it wouldn't touch my chest, but it does. So I rubbed some 2Toms Sport Shield there and hopped on Millie. 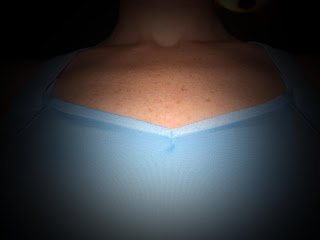 I told you I have a lot of freckles!

Two miles in and things were going great. No bra complaints. Happy legs. 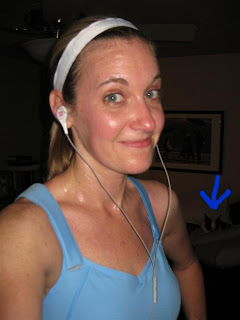 My Rowdy boy loves to snooze while I run.

I posted on Twitter to practice my texting and running skills. I also managed to post a picture on Facebook and post something on the Runnerds wall. I'm happy to say that I never even came close to falling off Millie. Emz sent some awesomely encouraging tweets and kept me motivated. One of my favorite tweets... 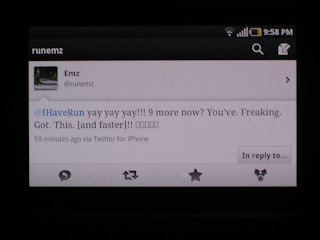 With two miles to go, I kicked things up a little and got it done. My legs were a little tired, but I was a happy girl. I have never done more than five or six mile runs the week after a race. But with only 105 days until the St. George Marathon, there's no time for slacking. I also needed to get this week's long run in a little early because I have big plans this weekend and because I'm doing next week's long run even earlier in the week because I'll probably be taking a little road trip with my girls. I will not running next week's 14 miles in the Arizona heat.

So overall the bra was great. My ladies hardly moved. The little stitch at the front left a red mark but nothing like the blister I have on my tailbone where my running shorts rubbed while I did (P90X) AbRipperX on Wednesday. 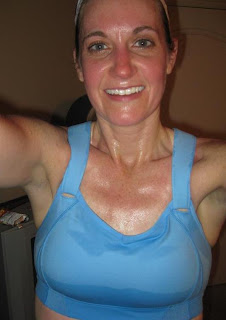 There were other random things about my run I was going to post, but I've got a party to plan. So have a great Friday and an even better weekend!