June 13, 2011
I have put this off because I don't know where to start. I guess I'll go with the Friday night blogger meet-up. It was fun to meet some of my favorite bloggers in person, and I was surprised how many bloggers were there that I didn't know. So now I have even more great blogs in my reader! I have more to say about the meet-up, but it could really be a post of its own and this is about my race, so I'll just finish this part with a pic of all the girls and me: 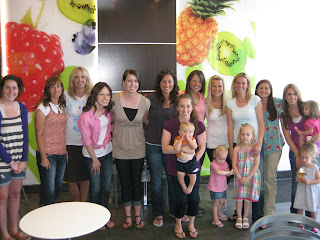 Saturday morning, I got up just after 3 am and got ready for the race. I ate LUNA Bar and drank some water. After debating whether or not to carry my handheld water bottle, I finally decided to fill it with Powerade and take it. The only flavor I can really handle is White Cherry. I'm sure that is valuable information to you.

Just before 4 am, I picked up my neighbor who was running it was well. It was her first race. And in case I forget to mention it later, she did great. Finished in 2:10 with a smile on her face.

Between then and the start of the race, there was the usual bus ride to the start, retying the shoes, two port-a-potty visits, and stripping off the unnecessary clothing.

Then the race started at 6 am on the dot. Gotta LOVE a race that starts on time! As I began to run, I thought about Farrah, Alicia and my bloggy buddies starting 13.1 miles behind me. And I knew my neighbor and my cousin (in-law) were somewhere in the crowd with me.

The weather was perfect. It was partly cloudy once the sun came up and the course has a lot of shade. I felt really good and consistently stayed between the 1:50 and 1:55 pacers for most of the race. I drank water at every other aid station and sipped my Powerade off and on. I had planned to use my energy gel around mile 6, but I couldn't imagine stomaching it once I got that far so I never ended up using it. I really need to figure out something I can handle before I attempt 26.2 miles. But I am happy that I figured out the hydration thing, so one step at a time.

About mile 10, I tried to clean my sunglasses because they were ridiculously smudged from my sunscreen, but all I managed to do was pull out a lens. Apparently I need to practice cleaning my sunglasses while running. Then while I was trying to (run and) put the lens back in, I managed to make the other lens fall out. So while I was stuffing both lenses in the little pocket on my handheld, the 1:55 pacer passed me. After a little mental pep talk about running my own race and not letting that get me down, I put my sunglasses frame on my head and kept on running. I had a weird stomach cramp for a few miles, but it was more like a side ache. It didn't feel like the kind of cramping from dehydration, which wouldn't have made sense anyway. And it actually was pretty tender after the race and all day yesterday in that spot on my stomach. That made it hard to keep my pace for a few miles, but I managed. And then I saw the finish line. You could see it for about the last mile, which was good and bad. It made me push a little harder, but it also made that last mile seem really long.

I knew as I started that last mile that I could PR, but I also knew it wasn't likely that I would get in under 1:55. And while one unnamed person that lives in my household thinks it's funny that everyone was congratulating me for my PR even though it was only by 1:09, I'll still take it. Just think, if I keep chipping away at my half marathon time like this, I'll be killing it in five years. Or something like that.

Here are my splits:


As I crossed the finish line, I saw my cousin-in-law waiting for me. He rocked the race, his first half, in 1:28:15, which got him third place in his age group. My girls and I (the hubs had to head to work after my race) cheered as loud as we could when they called his name at the awards ceremony: 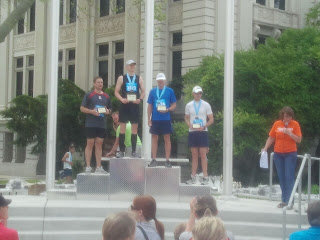 And the other good news, which you already know if you follow me on FB or Twitter, is that there was no puking. There were also no emergency trips to the potty after the race. And I was able to put something in my stomach - chocolate milk, a banana Creamie, lots of water and even two bites of pizza - right after I finished. This is a first. I usually can't even handle the thought of food for several hours after a race.

Then my girls were mostly patient while we waited to see all our marathoning friends finish. While we waited, I noticed Sam from Operation Jack standing next to me and decided to bug him. I knew he went to dinner with Alicia the previous night, so I asked if he had seen her yet. After a few minutes of my stimulating conversation, he decided to go run Alicia in. And it was awesome. He helped her get in just under 4:20! But you should hear the details from her, so go read HER BLOG (after you finish reading mine though). 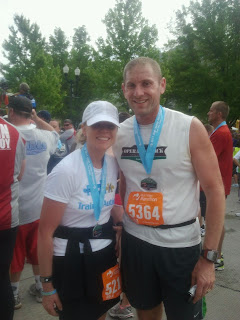 Farrah crossed just after Alicia. Like within a minute. And it was her FIRST marathon. She totally rocked it too. So there was lots of sweaty hugging (the best kind) and a few pictures taken and tons of smiles. I am so proud of both of them. And inspired by them. 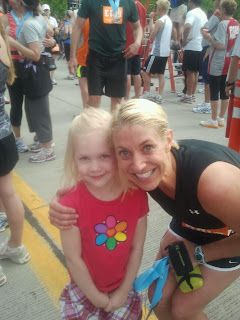 My Princess was so excited to see Farrah. I don't know if I've ever mentioned this, but Farrah and I bonded over running after she had been my girl's preschool teacher for over a year. Now Farrah is not only one of my girl's favorite people, but she is also one of mine! 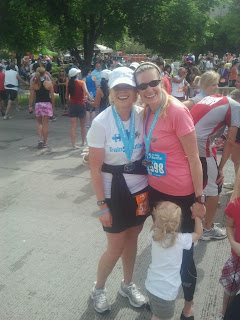 If you haven't donated to our Train for Autism team yet, it's not too late. Alicia has worked so hard for this effort and is such an amazing person. I am so lucky to call her my friend!
One of the best things that came from staying and watching so many marathoners finish was the confidence it gave me. During my race, I was doubting my ability to run a good marathon and to reach my goals. After standing at the finish line for over an hour, I was able to remind myself all the things that will get me through it: the pain is temporary; it is worth it; my body will be ready; so much of it is mental; and I've freaking got this. That last one went through my head more than once during my race (thanks Emz!).

Then as I was heading to the car, I ran into Julia. I had watched for the blogger girls, but hadn't seen any of them finish or wandering around, so I'd pretty much given up on seeing them. But Julia knew where a few of them were, so I got to give the Rachelle a BQ congratulatory hug and say a quick hi and goodbye to Janae (aka The Princess' new best friend) and her sister and to Ash. I was bummed that I didn't see Jen, but was so happy for her seventh marathon finish!!

And so another half marathon is done. I accomplished my goals and learned a lot about myself in the process.