June 25, 2011
I made a deal with a friend that I would take advantage of being on vacation a little more by unplugging if he will get more sleep. So as long as he keeps up his end of the deal, I won't be posting again until the end of next week. So enjoy this. And then be sure to come back because I have an awesome giveaway in the works.

Swimming
My girls are NOT big fans of the Arizona heat (neither is their mom). But they are huge fans of swimming. And because the pool is in the backyard at Grandpa's and Grandma's, we have been able to do just that at least once, if not twice, a day since we got to Arizona. 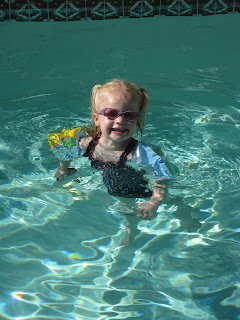 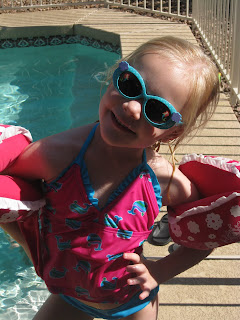 Sweets
Within a 24 hour period, I consumed a strawberry colada snow cone topped with cream from Bahama Bucks, mint ice cream with brownies from Cold Stone, and three cookies from Paradise Bakery. And I had a goal to NOT GAIN WEIGHT while on this vacation?!? I'm back on track today, eating more like a normal person. But those were a yummy 24 hours!

Sweat
Holy hot. We've established is is hot here. Yet I have NEVER been drenched in sweat like I was after running 6.5 miles outside this morning. My mom took my girls for a walk, so I decided to run outside rather than on the treadmill. However, running at 7 am in Arizona is nothing like 7 am in Utah. The sun was blazing and the temps were in the 90s. I was a good girl though, and took my handheld. The 16 ounces of water were gone by 4 miles, so I stopped and bought a Powerade at Sonic because Walgreens was still closed. And there was only a swallow of Powerade left when I finished my run. I realized I can drink a lot when it is hot without needing to pee. Apparently everything I drank came out as sweat. The Princess even told me I needed to shower before I went swimming because my sweat was disgusting. When I told her I wasn't showering, she said I at least needed to wash my face. There was literally not a spot on my body that wasn't wet.

Sheets
Yesterday my mom got an email from Bed Bath and Beyond about some new sheets. Or I should say Sheex. After watching the video in the email, I'm thinking we all need these sheets. Who knew sheets could be almost magic?

Seriously though, if they weren't so spendy, I'd be tempted.