October 14, 2009
Woo-hoo!! I got my package from Running Warehouse today!! I ordered two pairs of running capris, hoping at least one would work. I bought a pair at Target last week but ended up taking them back out of fear of chafing (down there) because the seams weren't flat like they are in "real" running gear.

I tried on the two new pairs, one Pearl Izumi and one Moving Comfort, as soon as they came, and I love them both. The PIs are thinner and shorter (so obviously the MCs are thicker and longer), so I might just have to keep them both! I'll try to remember to snap a pic when I wear them running so you can see them in action. I thought about taking a pic when I was trying them on, but they looked a little odd with the shirt I am wearing today, so I figured I could at least show you what they look like on an invisible body: 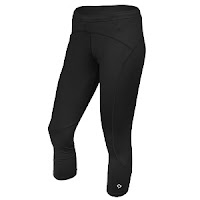 Pearl Izumi Aurora Splice Knicker
(As a side note: I think "knicker" is a great word!)

I also got a foam roller. It has been on my to-do list since I went to the doctor last week. Better late than never. I'm going to start putting it to good use today!!

In other news, I will be announcing a giveaway on Friday...