I've seen a lot of posts on Instagram and Facebook about comparison, and they always hit home a little.
I am as guilty as the next girl of comparing myself to others. I always notice who is skinniest and prettiest when I'm in a group of other women, and I always feel like I come up short. I use the term "women" here lightly because I like to believe that women build each other up and love themselves, while girls tear each other down and have a hard time finding the good in themselves, let alone other people.
I'll admit, most days I'm somewhere in the middle of being a girl vs. a woman. 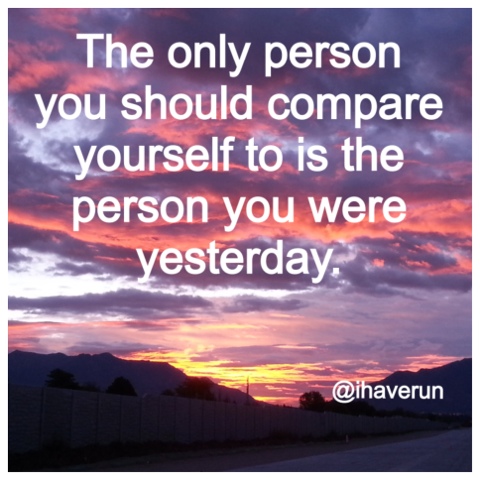 However, the exception to this is in my running. I have never compared myself to anyone else when it comes to my running. I run for me. And the only runner I compare myself to is the runner I was yesterday. I am only competing with myself, so what would be the point in comparing any aspect of my running to another runner? Every time I go for a run, I am simply trying to be a better, stronger and, yes, faster runner. 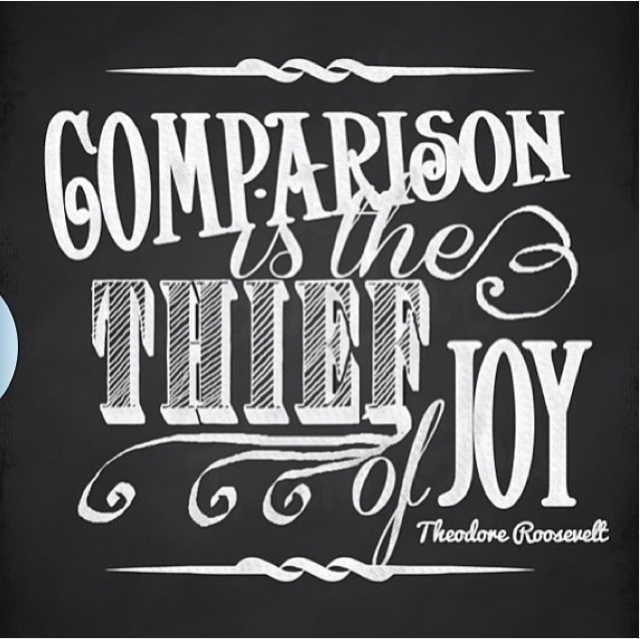 I truly believe comparison is the thief of joy. When I compare myself to other women, it doesn't ever make me feel better. I think many women do it in an attempt to make themselves feel better by comparing their strengths with others' weaknesses.
This side of the female gender is the main reason I don't have a lot of female friends. I don't have the patience for the pettiness, cattiness and constant comparisons that come with too many friendships. I want to surround myself with people who make me happy and make me feel good, not because I feel prettier or smarter or better than them in some way. But because we lift each other up. We bring out the best in each other. And we make each other want to be better.
The same goes for my running partners. I don't run with many people because my runs are for me. I only want to compete with me. I only want to compare my run with MY run from yesterday or last week. So I only want running partners who make me a better runner. And a better person. I feel very blessed to have several of these in my life.
I believe, without a doubt, runners make the best friends. They are encouraging, supportive and honest like no other people.
So I don't know why we do it. But we do. We constantly compare ourselves to others in so many ways. I only hope I can continue to do it a little less in my own life. That I can focus on being a person who empowers and encourages others and to love myself enough to find the good in myself and in others.
Posted by Unknown at 8:20 PM 5 comments:

Labels: comparison, find the good, love others, love yourself, runners make the best friends, you are your own competition

Congratulations to Christy @ My Dirt Road Anthem, the winner of the Frog Fuel tasting pack!!! 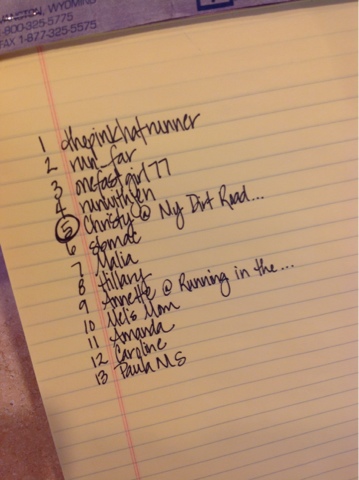 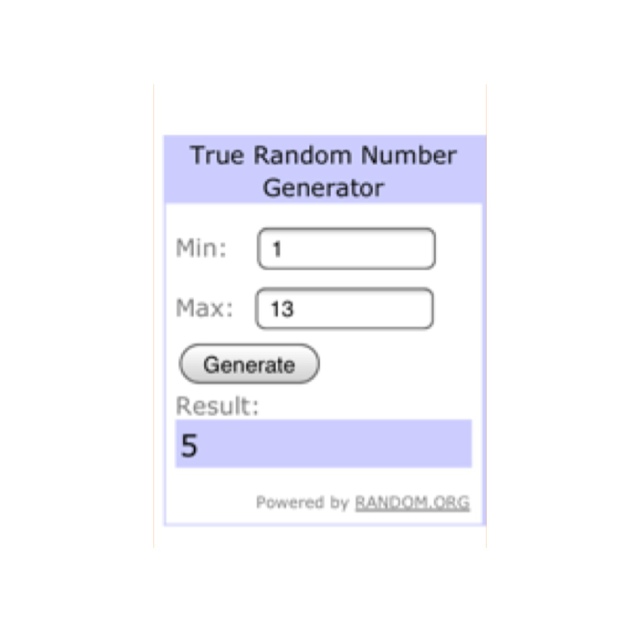 Note: I wrote this post yesterday, right before my Bean broke her arm and I spent the rest of the day at the doctor's office and hospital. So the workout I mention...that never happened. And now you have one less day to enter the giveaway, so don't wait!! 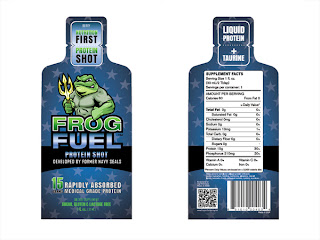 Labels: Frog Fuel, getting things done, giveaway, hangin' with my Bean, I love to run, lack of motivation, protein

Running in the Moonlight - A Giveaway!

Fueling update: Tried peanut butter Gu at mile 18.5 of my (26.2 mile) run on Saturday. Don't know if it really gave me a boost of energy, but I took it because I was beginning to feel hungry. It did manage to hold off my hunger until I was finished running. My stomach acted up a little the last six miles, but I don't know if that was the Gu or if it would have happened anyway. But I was able to run through it. The peanut butter Gu tasted OK, but it was a little too thick. I had to drink A LOT of water to get it all down. And on race day, I don't want to have to stop to drink multiple cups of water just to get some fuel in my body. So I'm on to the next experimental item on my run tomorrow... 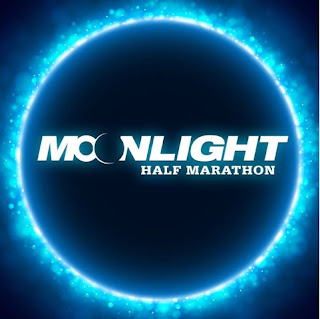 Now for the fun stuff. One race that sounds really fun is the Moonlight Half. It will be held on Saturday, August 243rd in Mapleton, Utah.

The Moonlight Half is a night race that you start when you want, with the goal of finishing as close to midnight as possible. The winner is the first finisher after midnight. And you can't use any timing devices!

Although I won't be able to run it because of other commitments, one of you gets to! I have a race entry to give away. And it's easy to win. All you have to do is visit the web site; then leave a comment here or on my Instagram telling me why you want to run this race! Winner will be announced this Saturday, August 17th!

If you don't win, be sure to  run it anyway. You can register at http://moonlighthalf.com.

You can also find more information about the race on its social media pages:
www.facebook.com/moonlighthalf
www.twitter.com/MoonlightHalf

On a Fueling Mission

For the record, the winner of the Fresh 20 cookbook was notified via email. Thanks to everyone who entered!!

Now, as for things running, I am on a mission. I am trying to find the perfect running fuel. For me.

I have tried it all. Gu, chews, waffles, candy, beans...you name it. Everything either bothered my stomach or was too sweet to get down. Literally. I could hardly swallow them. So I gave up.

I did all my training runs for my last marathon and ran the race on just water and electrolyte tablets. But I'm starting to wonder if a little fuel, at least toward the end of a marathon, wouldn't be such a bad idea. So I'm on that mission I mentioned earlier. I got five kinds of gels I haven't tried before, hoping to find one that is both kind to my stomach and doesn't make me want to immediately spit it out and wipe off my tongue.

I am going with gels because I want something that is in my mouth the least amount of time. And that I could basically swallow with water if necessary. Here's what I'm going to try: 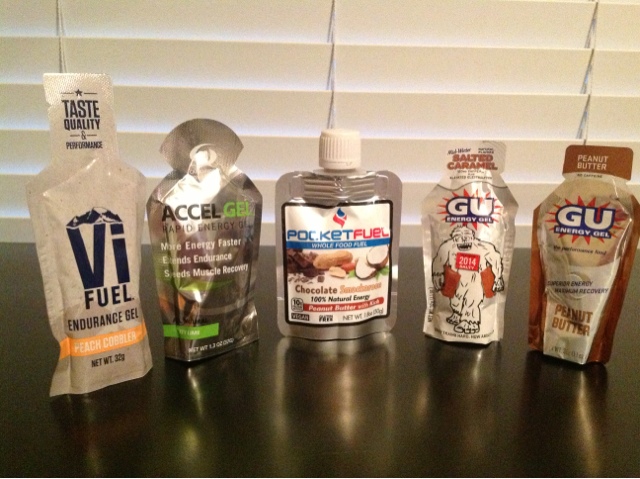 So tell me...what do you fuel with on long runs?