A race, a winner and a new baby

January 21, 2013
It's time to announce the winner of the Vega Protein bars! Thanks to everyone who joined the Thrive Forward program! If you weren't one of those that joined already, it's not too late. It's a great way to help you set some goals, make changes and just eat a little better. And it's free!!

So head on over and join now. You might be especially glad you did later (wink, wink). Now for the winner, chosen by Random.org:


Cy Waldron
Email your shipping info to ihaverun@hotmail.com and you will get a box of protein bars sent directly from Vega.

As for me "thriving," I'm trying. It would be a lot easier if I could get rid of this cold. Seriously! I'm going on four weeks here. Yet I didn't let it stop me from running my 5K on Saturday. It was great to be in St. George where it was a little bit warmer (but still not above freezing when the race started) and there was no inversion.

I had no hopes of a PR and wasn't sure how hard I was going to push myself, but I decided to make it count and put in some real effort. I forgot to start my watch (thus the reason for no pic of my cute little running buddy) at the start and felt like I was going pretty slow, but I finished in 23:13. It wasn't a PR, but I'll take it since my lungs are still working extra hard even when I'm not running.

We headed home shortly after the race to be home for the addition of my brother's first little guy to the family. We were all excited to meet our new cousin/nephew. But we made sure to stop and have some fun at our favorite place along the way! 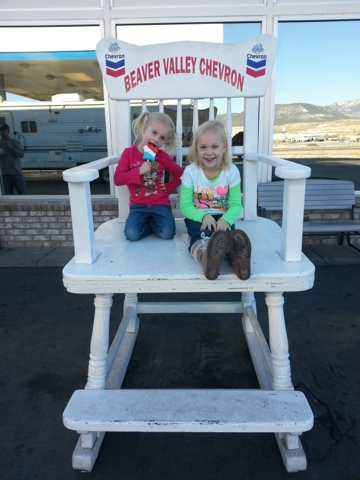