December 09, 2011
I know it has almost been a week since the RnR Las Vegas Marathon/Half Marathon, but it has been a busy month week. And it is still busy, so I'll do my best to keep it short.

We headed to Vegas on Saturday afternoon. I spent most of the drive playing on my phone and annoying the hubs. When we finally got there, we checked in at the hotel and headed to the expo, which fortunately was just across the street from our hotel. 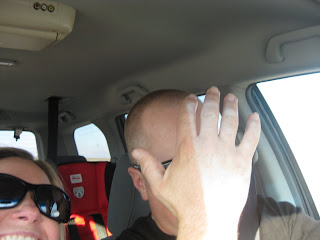 I picked up my bib and then found out they had run out of goodie bags. LAME. So we wandered around for an hour, since that was all the time left before they started boxing up everything. And they didn't wait a minute past the 8:00 pm closing time. I tried to buy a t-shirt at the last minute, but they had already roped off the area and were herding people to the exit. 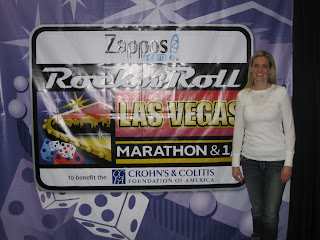 The expo was a little disappointing. I had pretty high expectations based on the size of the race and the comments from other people who have been to other RnR race expos. The view from our room, however, was not disappointing. 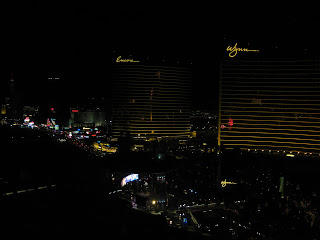 We slept in and had a late breakfast on Sunday. We did some window shopping and then headed to the hotel so I could get ready. I left the hotel just before 4 pm to get to the starting line by 5:30. It took me the entire hour and a half to get from my hotel to the start at Mandalay Bay. Then I couldn't find the gear check area, so I ended up at the starting line about 15 minutes after the first wave crossed the start and after being jostled and pushed and shoved into the bushes while trying to get there (I have the scrapes and bruises all over my legs to prove it). I finally made it into a corral and started running. Here are a few pics the hubs captured before I found him about two miles into the race: 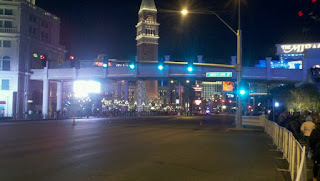 The empty strip. The best part of the race by far. 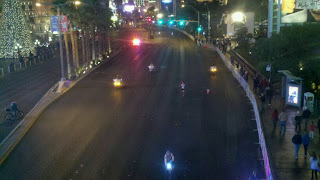 Why it's nice to be fast. 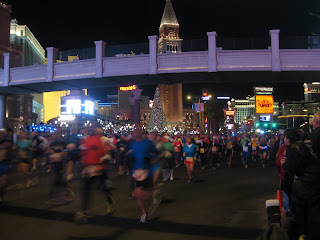 Pretty much how crowded it was the entire race. 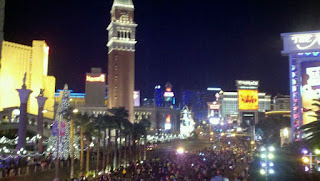 Running the strip at night. 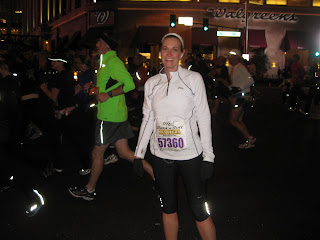 After I found the hubs, I took off the shirt I had on under the one in this picture, told the guy yelling in my ear to stop screaming "WHAT CORRAL WERE YOU IN?" because it wasn't going to matter at this point, and kissed the hubs goodbye.

Shortly after that, I needed to pee. But I couldn't find a port-o-potty for six more miles. And I kept drinking at almost every aid station because I didn't want to get dehydrated. So when I finally found a line of potties at mile nine, I was pretty happy.

Because I wasn't racing, I was able to take my time to go potty, to walk through the aid stations and to chat with the hubs when I saw him. I also left my Garmin at home, so I just ran whatever pace felt comfortable. I could tell I was running slower than my usual pace, but I didn't care. 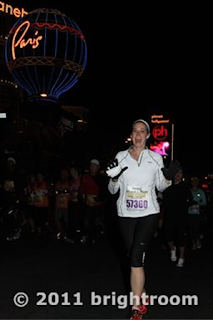 I finished in 2:18, my slowest half ever. But I am totally fine with my time. I wasn't as fine with the chaos as I crossed the finish and tried to find the hubs. You know it is bad when you plan to meet by the "M" in the family reunion area and you are both there for more than 15 minutes before you find each other. By the time we headed to Mandalay Bay to the gear check, I was freezing. My teeth were chattering and I was shivering from head to toe. And I had put on my coat by then. I felt so bad for anyone who was wearing shorts and a singlet.

When we finally weaved our way through gear check and back out of Mandalay Bay, we found the shuttle. It was a little bit of a walk, but it was better than walking all the way to our hotel or paying to wait for the Monorail again. My stomach started to bother me on the shuttle, so we headed to the public restroom inside the Venetian as soon as we got off the bus. That is when my body really became unhappy. I apologize in advance, but the truth is the proof that I was sick was coming out both ends. At the same time. And I'm not sure I have ever puked that hard or that long. It was actually not as entertaining as it sounds.

I thought it was really strange that my body was reacting like that after I took it so easy during the race. Then last night I read THIS article (after finding out about it on SUAR's blog). Basically, I was not the only one sick after the race. And there is suspicion that all the post-race sickness was caused by water handed out during the race that came from fire hydrants.

And because that wasn't enough, I developed a raging UTI on Monday. I can't decide whether to blame it on having to "hold it" for over an hour while running or on the water that caused all the other problems. Either way, it has taken all week and some strong antibiotics for my stomach to get back to normal, my kidneys to stop hurting and the urge to pee every 5 minutes to subside. Like I said, it has been a busy week.

How has your week been?