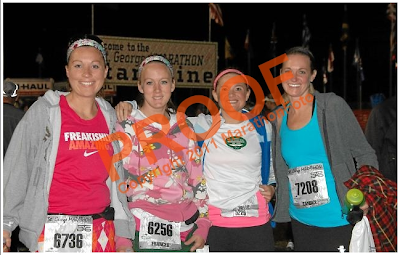 My hip was sore but bearable and actually felt the best on the uphills. I carried my handheld with Powerade and finished it off about the mid-point. I refilled it with water, but it became obvious later that I should have sucked it up and downed some of the lemon-lime Gatorade along the course.

The first 20 miles I maintained a pretty steady pace and felt pretty good, in spite of the rising temps and my hip. 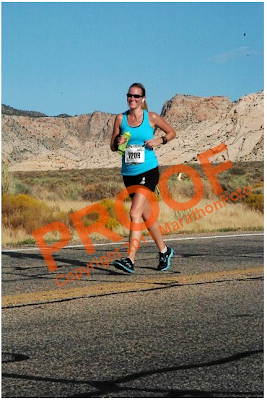 Then came the five stages of grief.

Denial - This started about mile 20 of the race. I didn't want to believe I was getting dehydrated. I tried to find other things to blame, but the truth was my body was shutting down. My mind couldn't overcome my body. When I saw my husband with about 1/2 mile to go, I broke down in tears and told him, "Everything hurts." But I kept going and crossed the finish at 4:49:27. Not my 4:15:00 goal, but I finished. There were so many times I wanted to stop, but I just couldn't. Quitting was not an option.

Anger - I was mad at myself for getting dehydrated again. And I was so angry at everyone who ever said the course is downhill because an elevation loss is not the same as a downhill course. Top of Utah, with the first half straight down a canyon, is downhill. St. George has plenty of uphills and so much of the downhill is very gradual. I was also angry at myself for believing there was no way it could be hot and miserable two years in a row. I was so wrong! And of course, the anger also came with a lot of disappointment.

Bargaining - Just get to mile 22 and then you can walk. Just get around this corner and you will see your family. Just finish and you never have to do this again.

Depression - This started as I crossed the finish. It didn't help that I felt like I couldn't walk in a straight line or think very clearly. All I wanted to do was sit down. So as soon as I found my family, that is exactly what I did. Then I stood up just long enough to puke my guts and a lot of water out. The hubs wanted me to go to the first aid tent, so we headed that way, but the effort of even getting there just seemed like too much, so I told him I would be OK. I saw Rachelle, but don't remember much about our conversation. And then I laid on the grass while my girls ransacked my race bag and the hubs went to get the car. I was texting Jen, who thought the first aid tent and an IV would be a good idea, but I couldn't peel myself off the ground. It took several hours and some food in my stomach before I could drink more than tiny sips of water or stand for very long. So the IV probably would have been a very good idea. Once my body overcame its depressed state, my mind swore off marathons and I spent the next few days pretty down about the race. 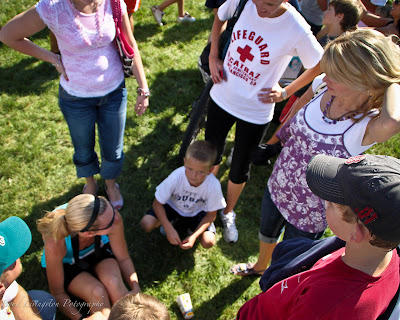 With my amazing family/support crew, just moments before the puking

Acceptance - This is where I am now. Finally. I am accepting that I can only learn from the race and look forward. It is ironic because those words - keep moving forward - went through my head hundreds of times over those 26.2 miles. I never planned on that being my mantra, but it worked and will continue to be my mantra as I continue on my running journey.