October 13, 2011
My last run was 26.2 miles. It was 13 days ago. With my hip still on the mend, I am biking and ellipitcalling like it's my business. And until I can spend some quality time with Millie again, I have been getting my running fix from other runners. Yep, you guys. Through your blogs and from two great running books (more on that later). And now I want to give you the chance for a little inspiration from Terry Hitchcock's story in My Run. 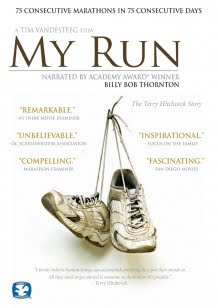 After tragically losing his wife to breast cancer and struggling to raise three young children on his own, real life super hero and modern day Forrest Gump, Terry Hitchcock seized on an idea. He wanted to accomplish the impossible: run 75 consecutive marathons in 75 consecutive days to bring attention to the incredibly difficult lives of single-parent families.

He ran in spite of freezing rain and unbearable heat, in spite of chest pains and bone fractures that wracked his 57-year-old body. He just kept running – each day, every day – strengthening an unbreakable bond between father and son – not stopping until he broke the finish line tape in Atlanta.

I have two copies of My Run: The Terry Hitchcock Story to give away. To enter to win a copy, leave a comment letting me know you follow my blog and also tell me about your last run or what inspires you to stay active.

Winners will be announced next Thursday, October 20.