April 14, 2011
Readers Note: I apologize for the use of the word "panties" throughout this post. I know some of my readers can't stomach that word, but it was hard to write about this topic without using it a few times. I could only get away with substitutes in some instances.

When I did the ABCs of Me a few weeks ago, I had a few comments on my response to U: Underwear. My response: Usually. I thought there were far more of you out there going commando on your runs. Apparently I was mistaken. So I felt the topic is deserving of a post all its own.

When I started running, I tried a few different types of undies. I knew enough to at least avoid cotton, and I knew I didn't want to deal with something inching its way up my crack while I run, so thongs were out. But after a few failed tries, I decided to try nothing. And it was great.

First, I am a not a fan of visible panty lines (VPLs). Even the all-knowing Urban Dictionary says they are a no-no:

"VPL is where the panties of a woman are visible through the material of lower-body clothing. This is a definite fashion misdemeanor. VPL damages the aesthetic beauty of a fine rump and can be very harmful to a woman's health."

Second, it was just one less thing to worry about when it came to getting ready to run and avoiding chaffing. It also helped that a lot of my running bottoms - all my running skirts and my running shorts - have built-in briefs. The only time I was officially going commando was in my tights and capris. That, however, has changed.

Those marketing people at Victoria's Secret know what they're doing when they send out those free panty coupons. When I got my free pair of Bare Ultimate Hiphuggers, I thought I couldn't love a pair of underpants more. These have NO SEAMS. Yes, you read that right. A runner's dream. No seams. And no VPL. What more could I ask for? 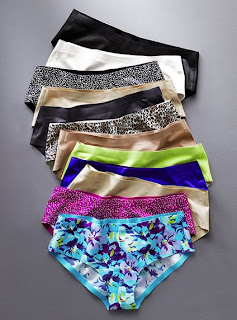 Then I got a free panty card for the Incredible Hiphugger. There is a reason it is called Incredible! These are the softest, most comfy undies I've ever had. I. Love. Them. They don't give me a little roll above the waistband, and if you can see a VPL, you are too close to my booty. And they don't move when I run. No wedgie is always a big plus. 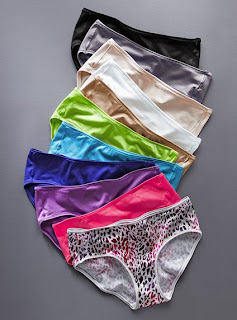 So I guess in reality I should change my answer on the ABCs of Me to: