Things I Love Thursday - Not My Race Photos

April 07, 2011
My little Bean's room has slowly transitioned from an office to a little girl's room. After I was able to let myself sleep more than five feet away from her, we moved her crib into the office. Since Bean is a seriously light sleeper and The Princess can sleep through just about anything and talks in her sleep A LOT, the original plan to have them share a room didn't seem like the best idea. At least not if anyone in the house wanted a good night's sleep. So Bean's crib went in the office. After a year in there, it was time to make the room a little more girlie. So out went the desk and in went a dresser and cute white bookshelf. The walls however still suggested it was once an office until this week. There was the picture of The Prayer at Valley Forge above her bed until this morning. Now there is this: 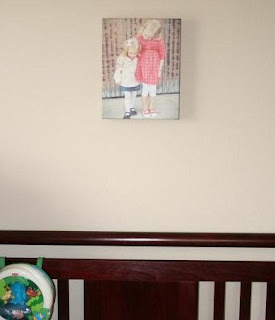 This canvas print was generously provided by Easy Canvas Prints. After I had The Princess's five year pics taken a few weeks ago, I knew one of those would be the choice for my canvas print. I was somehow able to resist the temptation to get one of my race photos done, although this one was tempting, just because it is proof that I ran a marathon with Spiderman: 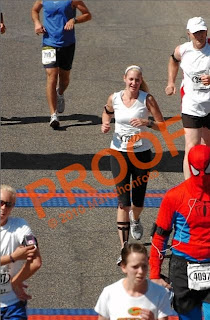 When I chose the picture I wanted printed, I didn't know I would love it so much. Or that it would be so easy to turn one of my favorite pics of my girls ever into the perfect thing for my Bean's room. And yes, The Princess also loves it. Enough that she might start wanting to share a room just to have it moved to her room. 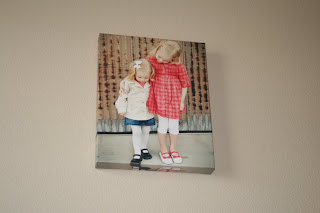 The Easy Canvas Print designer is so easy to use. It is a 4-step process that lets you choose your canvas size and how thick you want the wrap (mine is the gallery wrap - 1.5 inches), upload your image (it uploads very quickly and tells you if your photo resolution is too high or low), pick your border (I chose the mirror image, which extends a mirror image of your pic around the sides), and then you choose your image options (things like turning it black & white or sepia or getting minor or major retouching). That's pretty much it.