April 07, 2011
I literally cringed the other day when The Princess tried on her soccer shin guards for the first time and told me her legs look fat. I know she didn't mean it like most people mean it when they say something looks fat, but it still gave me a little shock. We don't use the "f" word at our house. I am very, very careful to never complain about looking or feeling fat in front of my girls. I am very aware of what they are exposed to and take a certain amount of pride in the fact that The Princess didn't acknowledge the differences in people based on their size until recently. Even now, at 5-years-old, it's just a simple acknowledgement, not a judgement.

I never want my girls to dislike their bodies. It is nearly impossible to avoid being exposed to the public perception of what is attractive and acceptable as far as a woman's body goes, so the least I can do is set a good example in what I say and how I treat my body. As a mother, I have a responsibility to teach my girls the value of and to respect their bodies. One way I do this is through the example I set with my running. I also encourage them to be active through things like gymnastics, soccer and an occasional run on the treadmill. 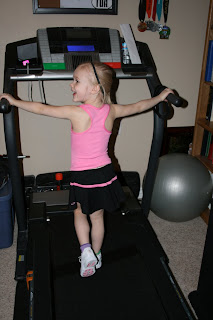 I was a little optimistic the other day when I thought I would be able to run. I did get as far as putting on my running shoes and stepping on the treadmill. Yet, I knew as I slid my shoe over my toe that it wasn't going to happen. That didn't stop me from turning Millie on and taking a few steps though. I thought maybe the pain would somehow ease up once I started running. Nope.

So now my booty is sore from the bike seat, the scale is literally stuck (even the numbers after the dot, as in 199.99, don't even change!) and all I want to do is eat. The eating thing should only happen when I'm training. And training I'm not, at least not the way I should be with a half marathon on the 30th. But sore toe aside, I'm going to keep on keeping on, because getting rid of that "f" word feeling doesn't just happen on its own. That means P90X Core Synergistics tonight and another attempt on Millie tomorrow, with 20 miles on the bike as a back-up plan.

I don't get to take a break from setting a good example for my girls just because I'm having a few weeks where my clothes don't seem to fit right or because I got a boo-boo. I don't want to take a break. Core Synergistics, here I come.