May 04, 2010
Thanks for all your nice comments about my blog's new look. And thanks even more for not pointing out that I don't look exactly like the Runner Barbie in my header. I'm working on it.

I have a lot to say and little time to get it all down, so I'm going to dive right in. After a pathetic week of running (two days) with a little cross training thrown in (two other days) last week, I am recommitted and back on track. The Utah Valley Half Marathon is six weeks away and I am going to buckle down, log the miles and kick some booty on June 12.

Next: manpris. You know, capri pants, but for a man. I know I don't have a lot of male readers, but I know all you females have men in your life and can share the following wisdom with them: manpris = no. Please no. There was a guy at my last race in a pair of black Adidas manpris. I don't know if they are sold specifically to men or if he wandered into the women's section, but there was nothing manly about them. Then last week I took my girls to the park and there was this big Samoan guy, pushing his little girl on the swing, wearing denim manpris! I understand he is surrounded by mostly women at 10 am on a weekday morning at the park, but that doesn't mean he has to dress like a woman. I'm sorry, I just can't get on board with men in capris.

Now that I'm finished handing out fashion advice, I figure I should make my way back to running. Saturday morning I signed up for the Hobble Creek Half Marathon on August 21. Hobble Creek was my first half (last year), and I really enjoyed it so I had it on my calendar to register the day registration opened. Registration for the race always opens May 1, and last year it filled up in the first two days. I figured it would fill up faster this time and even debated waiting up to register at midnight. I was too tired though and went to bed instead. The hubby got up at 4:30 for work, and when I was still awake at 5:30 I decided to get on the computer and register. When I checked the race web site later that morning, it said registration was closed and had reached its cap by 10 am!! Craziness.

Last but not least, I finished watching Spirit of the Marathon. The hubby asked jokingly at one point (from the other room) if I was crying. I answered no, but was glad he didn't walk in a few minutes later when I was starting to get choked up as the runners crossed the finish line. If you haven't watched it, you should. 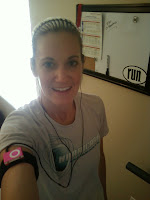 RUN: I wore my race shirt from the Hurricane Half 5K last week during a treadmill run, and it is the first race shirt I actually like. It doesn’t have anything on the back and just has the race logo on the front. And it fits just right.