Friday
Because packet pick-up was only held the day before the race, my girls and I drove the hour to Ogden and picked up my number. I quickly made my way around the expo, but didn't see anything I couldn't live without. I read Bart Yasso would be there to speak at different times throughout the day and was actually surprised he would be at such a small expo/race. However, the race was voted the ninth best marathon by Runner's World, so maybe that had something to do with it. Because I knew he would be there, I took my copy of My Life on the Run and had him sign it. He was just sitting on a table, hanging out by himself when I found him. He signed my book and chatted with my biggest midge, asking if she is fast and if she is going to be a runner like mommy. For the record, it was a "yes" response to both questions.

Friday night, my cousin came over for our weekly girl's TV night. She was also spending the night because my hubby had to work Saturday. Yes, this is the same amazing (and beautiful and funny) cousin that went to St. George with me. She rocks!!

We headed to bed a little after 10 pm. I set my phone to wake me and tried to fall asleep. The last time I looked at the clock, it was a little after 11 pm. The next time I looked at the clock, it was 11:45 pm. My biggest midge was complaining that her nose was stuffed up. She got in bed with me and complained every 15 minutes or so until almost 2 am. I tried to sleep, but I was SO hot with her glued to my side that I moved to the floor where I told myself over and over that I needed to get some sleep until I finally dozed off about 2:45 am. Fifteen minutes later, my phone went off. I figure I got a total of about 2 hours of sleep. Woo-hoo. Ready to run!!

Saturday
I got dressed, kissed my sleeping girls and hubby and headed out the door. Another hour drive to Ogden, boarded the bus, then waited. Since we had over an hour between the last bus drop-off and the start, I spent some time in the port-a-potty line (three times), chatted with an 80-something gentleman about the 28 members of his family running that day (marathon, half and 5K), stretched, gazed longingly at the people close to the fire pits, and finally stripped down to my race clothes and headed to the start. I started between the 9:00 and 10:00 pace signs. I was shooting for around 2:10. I figured that would keep me around a minute slower than my goal pace for next month's half. Then we were off. 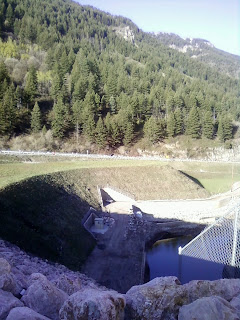 I don't really have a mile by mile recap because it seemed to go pretty quickly. Here are some of the highlights though: 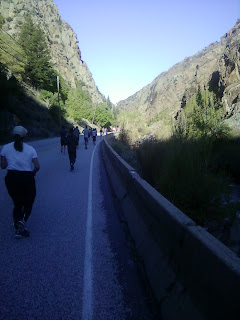 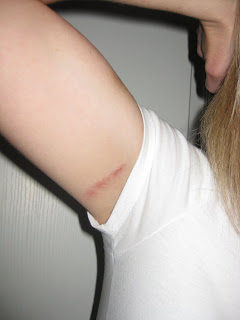 (I know you've always wanted to see a picture of my armpit!) 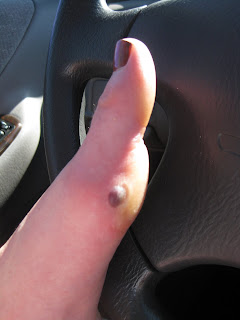 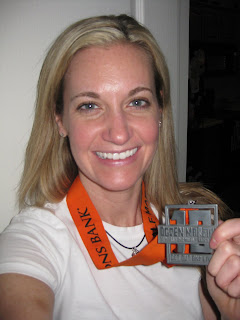 I forgot to take a post-run photo, so this will have to do. I had to show off my medal though, especially since it is my first half marathon medal. At my other half marathon, all I got was a carnation.

RUN: My legs are a little sore but nothing crazy. I am going to ride the bike today to give them one more day "off."