May 06, 2010
I finally tore myself away from searching for cheap flights (there aren't any) to New York so I could write this. Apparently this is not the time to book a flight to the Big Apple, but I'm not sure how much longer to hold out for a good deal before I just give in and pay a ridiculous amount. So if you hear of any amazing deals to any New York City area airport, let me know.

I didn't make my way over to Blogger to talk about my flight search woes though. Today I am going to (finally) answer one of the questions I didn't include in my 100th post because I thought it needed a little extra attention.

Jesse asked... I know everyone seems to say that having kids was one of their best decisions, makes them so happy..., but if you are completely honest with yourself, do you miss having a traditional career? How hard is it for you to have an identity outside of being a "mom"?

If I am completely honest, I can say I don't miss having a traditional career. I admit I miss things about it, things like the daily adult interactions and conversations and business trips to new places. But I wouldn't trade it for what I have now, and having kids was one of the best decisions I've ever made, as cliché as that sounds.

I am, however, lucky to be able to continue my career at home, on my terms and on my time. I think that has been important in allowing me to have an identity outside of being a mom. And even if I didn't work, I think the key to maintaining an identity as a person and not just a parent is allowing yourself to have interests and passions that are your own. Running is a perfect example of this in my life. I can't let myself feel guilty about it or it wouldn't ever happen. 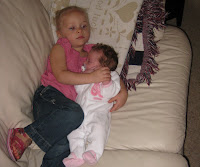 Like everything in life, being a mom is about finding the balance. I know mothers who are mothers and that is it. Their marriages have suffered or dissolved and they have no identity beyond who and what they are to their children. I know other women who openly resent or neglect their children, and you can tell they had kids because they thought they should or because they didn't think at all.

I have said before that I didn't make the decision to become a parent lightly, even the second time around. I will also say this again: it was one of the best decisions I've ever made.

I guess that wasn't as hard or as lengthy as I expected, but I hope I answered the question.


RUN: Sugar cookies, just one of the reasons I run. 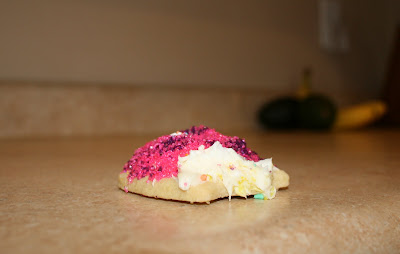 (This was one of my 4-year-old's creations yesterday. Mine had a little less frosting and sprinkles.)