The race was the Dogtown 9K in Washington, Utah. Since it is over three hours from home, we stayed with my aunt and uncle, who were awesome to watch our girls while the hubs and I ran.

This was only my second race with the hubs. We ran one race together a few years ago, but I pushed both girls in the double jogger. So this was a whole different experience.

Since the hubs has been having some knee issues, we went at his pace and just enjoyed the rare opportunity to run together. 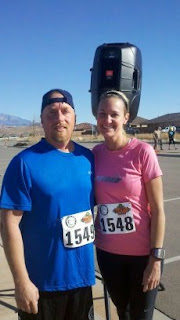 One of the highlights of the race was getting shorts instead than a shirt in the race packet. These are mine, which I wore to bust out some speedwork tonight: 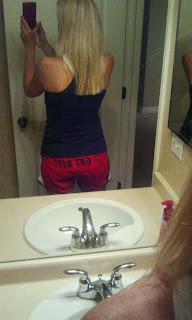 Sorry about the over-the-shoulder in-the-mirror butt shot, but the hubs wasn't around to take the pic and the shorts' decoration of note happens to be on the booty. The guys got longer black running shorts, which oddly don't say "Get Bit" on the booty like the girls' do.

And that, my friends, is what a race report looks like when I should be sleeping instead of blogging.