Things I Love Thursday - That Little Voice in My Head

June 21, 2012
I'm exhausted. Who knew summer could be busier and crazier than the school year? Between baseball games, swimming lessons, summer camp, work and making the most of it being "summer," I feel like I never slow down. My blog neglect is proof of the craziness that is my life right now.

However, life is never too busy to run. It's all about priorities. And MAKING the time. Making the time was a little easier this week because my girls had summer camp from 10 am - 2 pm, which meant I had the chance to run outside three days this week. Starting at 10 am meant warmer temps though, so I checked the weather and decided Wednesday would be one of the better days to tackle my longer run. So yesterday I headed out for 10 miles after I dropped the girls off. It was a little warm, but not too bad. My legs were a little tired from the five hilly miles I ran on Tuesday, and the rest of me was very tired from staying up way too late (but totally worth it) at the Collective Soul concert. The picture below was before the concert. All the "during" pics are on my hubby's phone. The concert was in was a small club-like venue. It was awesome to be close to the band, which is really amazing live! 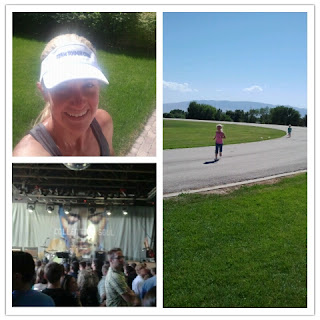 With my long run done, I debated hitting the treadmill for today's scheduled four miles, but I decided to tackle the warmer temperatures. I told myself it was making me mentally stronger in case the St. George Marathon is hot again this year. I'm trying to learn to love that little voice in my head.

On my head, I wore a visor (my Team Tough Chik visor!) for the first time. It was great for keeping the sun out of my eyes and didn't move. It got pretty sweaty though, which made me and my sensitive skin a little worried about breaking out all along my forehead, which would be so awesome! So I will probably only wear it every other run or so. And only after it has been washed! I'm not sure why it's glowing in the picture.

And last but not least, I tackled a run at the track for the first time last week. Not far from my house, there is a track with a playground next to it. The girls played while I logged a few miles. I didn't plan a certain distance, but instead let my girls decide when we would be done. I wasn't sure how long they would last because it was late afternoon and pretty hot! Toward the end of two miles, they headed over and started running around the track too. They were both wearing flip flops, but that didn't slow them down. I'm thinking about tackling my speedwork at the track next week, but I think we'll head over a little earlier in the day this time.

What are you loving on this first official Thursday of the summer?