April 24, 2012
Almost all my running bottoms (shorts, skirts, capris, etc.) are black. I never really thought about the fact that black is the main option when shopping for something to cover my bottom half. But today I realized there is a reason most things come in black.

Take a look at the options for running tights and capris at any running store, and you will have a tough time finding anything other than black. So when I saw these on sale for $25, I was pretty excited to be able to add a new color to the bottom half of my running wardrobe. 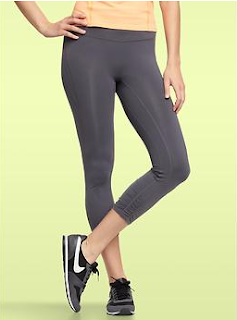 (Not my body. I wouldn't wear those shoes to run. Image taken from Gap.com)
Today I found out the reason most running capris and tights are black. I also realized my crotch sweats a lot. It was pretty warm today, so I was pushing it by wearing capris in the first place. But I had on a tank (They have this year's version at Costco!!!! And they are even better than the ones from last year!!!), so I figured I would at least survive since I was only running around five miles.

About three miles into my run, I looked down and was grateful for the long length of my tank. If you looked close enough (which I realize no one should be doing, but that isn't the point), it looked like I peed my pants. I had some serious crotch sweat happening. And I'm sure there was booty sweat to match.

The reason you can get away with shorts and skirts of just about any color is because most of the crotch sweat stays in the liner of the shorts/skirt.

So there you have it. My sweaty lesson learned. However, I love the capris, so sweaty crotch be darned.