A race, Rapuzel and other randomness

September 09, 2011
Because somehow life has been busier the last two weeks than it was during the summer and I have been so bad at blogging lately, you get an awesome Friday post of randomness.

My race schedule is getting smaller and smaller. And tomorrow, I will take yet another race off the list. I am running the Spanish Fork Half Marathon. I have no idea what the course is like, but I am excited to be able to just run since I paced my last two half marathons. It is also the final of my four races for Run the Slam.

I posted a giveaway on Wednesday. Have you entered yet?

This week I realized I may have a little bit of a crush on Flynn Rider from Tangled. Still trying to decide if that means I have a crush on Zachary Levi, aka Chuck, (who does his voice) too? I also realized Little Einsteins is one of the most annoying shows on television.

I am still administering seven types of medication to my Rowdy boy. We are just waiting to see if the eye with the ulcer heals. It will either heal or rupture, which would mean some tough decisions, so we are holding our breath. And keeping our fingers crossed.

I have the best husband ever. I don't talk about him much, but he is amazing and supportive and I wouldn't be a runner without him. He is the reason I am running St. George. After last year, I said I wasn't running another marathon until my girls were older. He knew how disappointed I was in how St. George turned out though, and talked me into at least putting in for the lottery. Then of course I drew out. He has made sure I've had the time to train and has been there to push me when I needed it and talk me through the tough runs. He has way more confidence in me than I do in myself! Yesterday, I ran while my girls were both in school, which meant I was able to run outside. It was still fairly cool in spite of being 10 am, so I channeled some of his confidence in me and finished my 7 miles in 1:02:21, an 8:54 pace.

And last but not least, my little baby Bean turned three on Monday. I am still trying to accept that she is three and no longer my baby. She is an amazing little person with SO much personality. She didn't start talking until she was almost two and a half, which might be why she is one of the most expressive, animated kids I have ever seen. She is also incredibly loving and sensitive. She will randomly give me the biggest hugs and tell me a "I love you sooooo much."

Saturday, she opened her present from Grandma and Grandpa before Grandma headed home to Arizona. When Bean tore off the wrapping paper and saw a shoe box, the look on her face was priceless. She just kept asking why Grandma gave her shoes, until we finally talked her into opening the box. 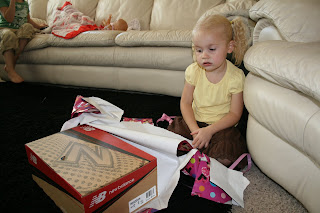 Then on Monday, she insisted on opening her presents before she even ate breakfast. Her mismatched jammies in the picture say a lot about her crazy little personality. 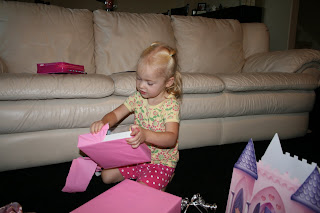 After the requested pink birthday pancakes, we rode bikes and scooters, one of her favorite things to do. It was awesome that her Daddy was able to be home all day for her birthday. I thought it was also fitting that it was on Labor Day and I was in labor exactly three years before. 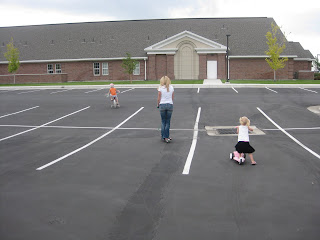 To finish off the birthday celebration, we had a little Minnie Mouse themed party Tuesday night, where she got to blow out her candles for a second time in two days, which was one of her favorite parts of her birthday. 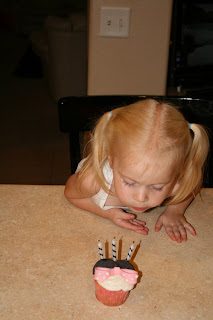 Now it's your turn. Since I am behind on my blog reading, tell me some randomness from your life lately!