April 26, 2010
For being a 5K race, I have thought about so many things I want to include in my race report. Hopefully I will remember them all now that I have time to sit down and try to organize my thoughts.

Because the race was in Hurricane, which is a little over three hours from my house, we went down the night before. My girls and my awesome, beautiful, super-fun cousin went down with me. We got there late Friday night and pretty much went straight to bed. Our hotel was in St. George, which is about a 30 minute drive from Hurricane. Because we got there late on Friday, I had to pick up my packet before the race and wasn't sure how much time to allow for that. I knew the bus to the starting line left at 6:00, so I set my alarm for 4:30. As usual on the night before a race, I woke up several times. One of those times was at 4:20, so I turned off the alarm and got ready. I left the three sleeping girls and headed to the race.

I was one of the first people there, so I picked up my packet and then hung out it my car to keep warm. I checked my email and read all your encouraging and luck-filled comments. Thanks for that by the way!

After I saw the half marathon buses pull away, I headed inside the building where I had picked up my packet and went potty (three times). The buses finally loaded just after 6:00 and took us to the start, which was also the last part of the half marathon. There was one port-a-potty, so I got in line. I know from experience that it is NOT FUN to run a race when you feel like you need to go, so I like make sure I am running on empty. After that last potty stop, I slowly ran a little and stretched to warm up. There were about 200 runners, so when they announced they would be starting in two minutes, I made my way to the actual starting line. Because they didn't have chip timing, I wanted my time to be as accurate as possible (typing that actually made me laugh, but I'll get to that).

After three failed attempts to shoot the gun on "go" (of "ready, set, go"), they finally got the gun to go off. I started the G-man and ran. My legs felt strong, my calves were happy, my knees were cooperating. It was all good until I got to the marker that showed we had three miles to go and realized I had gone well over 1/4 mile already. Huh?

At each mile marker, my watch showed I was about 1/4 mile off. I tried not to think about it and just ran. Most of the race I was alone. There were less than a dozen people in front of me and only two people passed me the entire time. It was weird for me. When I glanced down and saw my watch pass my 26:00 goal time, I was a little discouraged ... until I realized the miles were past the 3.1 point. I stayed strong though and crossed the finish at 27:49.

After crossing the finish, I asked the race director about the distance and verified that the course was exactly 1/4 mile long (which was also confirmed by several Garmins that were next to me at the starting line). The race people measured the course on Google Maps and apparently no one took the time to verify that it was correct. So according to the race info, I ran the "5K" in 27:49. But I'm going with the more official stats from the G-man:

3.35 miles
27:41
8:15/mile
It was frustrating to see the 27 in my final time when I was trying to PR and after seeing my pace on my watch consistently between 8:00-8:30 throughout the race. I tried to figure out what my time was at the 3.1 mark but gave up trying after spending way too much time on the computer wandering around my Garmin's graphs and stats. If you know how to do that, PLEASE share.

And did I mention, I took 2nd in my age group?!? I know there were only 200 runners and it might be the only time I ever get a medal for an age group win, but I was still pretty stinkin' excited! 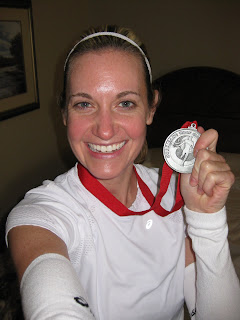 Silver for Second Place. Yay me!

RUN: I remember my legs being SO SORE after my last 5K (in 2007). My legs hardly knew they put in that extra effort the day after this race. That is just one of the things that reminds me how far I've come.