February 23, 2010
Life has been seriously busy the past little while, but there has been running. Not just any running though. I can finally count myself among all you other lucky bloggers that have met and run with other running bloggers.

Alicia and I talked about getting together to run after we realized we live pretty close to each other, but I was a little chicken when it came to making solid plans. Luckily Alicia is a little braver and invited me to do a 10K training run with her (and a local running club) on Saturday. Once I committed, I was so nervous I would slow her down or try to chat with her when all she wanted to do was run. I know it has been a while (a long while) since I was part of the dating scene, but it reminded me of the anticipation of a first date. However, I was much happier after this first date than most of the ones in my memory.

When Alicia first walked in to the running store where we met, it took me a minute to realize it was her because she was with her husband. I didn't get her Facebook message telling me he was coming until I got home from running, which was probably good because I would have been even more nervous. Her hubby, Thai Guy, was great. He was very friendly, and he ran a little ahead of us so we could talk. And we did talk! The more we talked, the more I realized we seem to have a lot in common: two kids each, one marathon behind us, attended the same university, and on and on.

After I ran with Alicia, I was nervous about what to write on here, so I was glad she wrote about it first. You can read what she had to say HERE. Why was I nervous? Because it was AWESOME! In fact, that was the exact word I used when my husband asked how it was. But I didn't want to get on here and gush about her and the run and have her think I am some crazy person and scare her away. (Maybe I'm doing that anyway?!?) Bottom line, it was great.

Hopefully we'll be planning another run together soon. The run (my longest since before the holidays) went so quickly. Maybe next time we'll have to do the half marathon training run just to give us more time to chat! Alicia was so easy to talk to and her personality is as cute as she is. Here we are post-run (don't let my bright red face distract you from how cute she is): 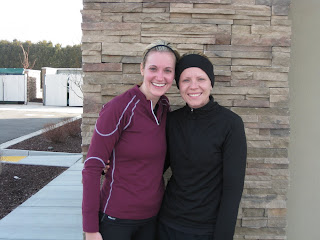 (And by the way, I'll be discussing the Runner Barbie allegations in a later post.)