January 27, 2010
I have several posts in the works but decided to start a whole new topic instead of finishing one of the others because I have been obsessing about it a little lately. The topic? Yep, dimples. Each of my girls has a single tiny, darling dimple on her right cheek. My little brother has the best dimples I have ever seen. Tall Mom Mel and her boys have awesome indentations. Dimples are stinkin' cute on cheeks. More specifically, the cheeks on your face.

The other cheeks, not so much.

Last night I was laying on my bed, talking to my husband on the phone, rubbing my puppy's belly with my foot. At one point, I became so distracted by the dimples (we're going with dimples here because it just sounds so much better than cellulite or cottage cheese) that came and went on my thigh as my leg moved with each rub that I had stopped talking and my husband asked what I was doing. 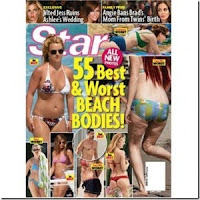 There are two things that make my own dimples more bearable. First, I sadly feel better when other people have the same problem. I love when those tabloidy magazines have pictures of celebrities with their dimples showing. I never buy the things, but I always take a minute to check out all the photos. And the other night while watching Cougar Town, I caught a glimpse of Courtney Cox's not so smooth thigh and watched that part over in slow motion, frame by frame, several times, just to make sure it was real (I said I have been obsessing). It made me feel a little better because she has a killer body, and dimples.

The other thing that makes me feel better about my dimples is running. When I am running (more than 1 mile a day obviously), I just don't seem to notice as much. Either I feel good enough about myself that I don't spend extra time at night studying my flaws or I notice the definition in my legs instead of the dimples.

At least I am not the only one obsessing about it. Weight Loss Mama Staci has a post on her blog about dimples today too.