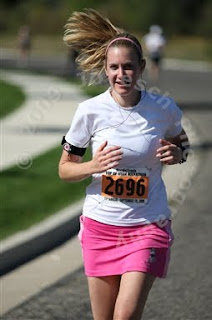 Speaking of lists... I made a list of things I want to remember to include in my race report, but that list is upstairs and my legs are currently not friends with the stairs. I am going to try to remember everything on the list, but I figure anything I forget will just make a good post topic later. So yes, this is my race report. I finished my first marathon on Saturday. And the first item to note is that I did indeed finish. That was my goal. To finish.

Now for the details. I spent the night in a hotel about an hour from the race start; that took an hour off my drive, so it was worth it. (It was the closest one I could get by the time I decided to make a reservation.) After waking up about 10 times, I got out of bed two minutes before my 3:45 am alarm was set to go off. I made it to the bus about 5:30, got to the start, went potty, and spent the rest of the time moving to keep warm. I was happy that I remembered to bring a blanket to wrap around my legs! At 7 am on the dot, the gun went off. Several minutes later, I crossed the start.

My goal was to maintain around a 10:00 pace. Other than being cold, I felt pretty good the first few miles. At mile two, I could finally feel most of my hands. My thumbs stopped being numb at mile three. Mile three was also the first aid station. Because of my dehydration experience at the end of my half, I think I was a little too cautious and drank too much (2-3 cups of water or Gatorade at each stop). This resulted in three potty stops before the halfway point. There were port-a-potties every other mile, but I didn't want to wait in a line of even one or two people so my first two stops were in the bushes. Because the first half of the race is down a canyon, finding a quick, discreet place to go was easy. Although someone might want to tell that to the guy that I passed TWICE while he was peeing just a foot off the road. I didn't see anything, but I probably could have if I would have turned around after I passed him.

After potty stop three, I stopped gulping so much at every aid station. My legs were getting a little tired by the halfway point, but it wasn't anything that was slowing me down. I hit 13.1 miles at 2:13. At that point I was pretty confident I could finish in 4:40. I only needed one more potty stop during the second half, and my pace stayed pretty consistent until mile 19. Then my right leg started hurting on the outside, just above and next to my knee. Around mile 20, the pain was shooting up toward my hip and forced me to slow down. At mile 21, I stopped to have Icy Hot rubbed on my leg at the first aid station. By then my knee was also hurting, and I was walking off and on. After walking a few minutes, the pain would subside and I would run again. But then the pain would build up and almost completely stop me. When I could run, I was hitting a 9:30 pace, so I knew I had it in me to make that 4:40 mark. Unfortunately my leg wasn't cooperating. I ran as much as I could and walked when I had to. When I crossed the finish, the clock said 5:02. My Garmin, which I forgot to turn off the autopause feature, said 4:52. I figured my actual time was closer to the clock time with all my potty stops. My husband received a text with my chip time when I crossed the finish. 4:59:12. Goal!!

Now for some marathon miscellany: 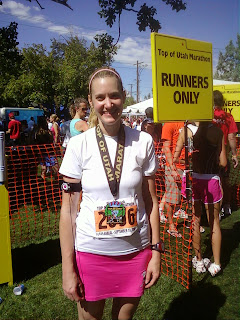 That's it for now. Enjoy the picture of my lovely post-race glow. I will share more pics once they are posted from the race!