March 11, 2015
Running is hard. Parenting is hard. And the more I think about it, the more alike I realize they are. 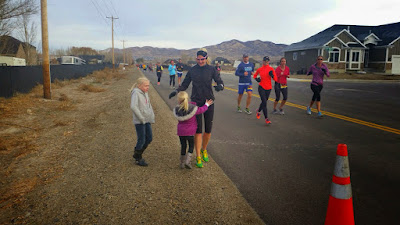 If you only have one or two children, parenting isn't automatically easier for you. You are not less of a parent than someone with more kids. No one knows how much you put into your effort as a parent. You can devote more time and energy to one child than someone else does (cumulatively) to four children. And just because you run less than someone else, doesn't make you less of a runner. You may be a much smarter runner. A much more disciplined and informed runner. What you see on the outside can be deceiving. So don't judge a book (or a parent or a runner) by the cover.

Even when your youngest child is 6-years-old, sleeping through the night isn't something you can count on every night. And when they are older, they keep you up late because they are out with friends or just because you lay awake worrying about your perceived failures as a parent. Feeling tired is something that becomes the norm when you are a parent. When you are running regularly, especially when you are training for a race, you are also always tired. You just don't get tired the same way when you are going to the gym or working out at home every day. There's something about running that takes that little extra out of you.

When you are a parent, there's poop involved. Whether it's in diapers, wiping toddler fannies, hearing poop comments, or being randomly informed by your child, "My poop has been green the last two days," you can't get away from it. For some reason, it is also very much a part of being a runner. Whether it didn't happen and its lack thereof haunts a run or (especially) a race, it does happen but at inopportune times, or your stomach decides to rebel post-run/race and let's you experience it off-and-on for the rest of the day, poop is involved.

The biggest similarity though: