Things I Love Thursday - Getting Back on the Horse

May 23, 2013
My little Bean is obsessed with horses. After asking for months when she could ride a horse, we signed her up for riding lessons. She is fearless. All she wants to do is "go fast." But she's also willing to do whatever it takes to be able to ride a horse. She puts in the work. She brushes the horse; cleans out its hooves; puts on the saddle and the bridle. She has learned all the commands and noises to guide the horse to do what she wants. She has completely devoted herself to learning to ride a horse so that she can go fast. (Sound familiar?)

Her last few lessons, she started galloping. First it was walking, then trotting and now galloping. For that tiny little 4-year-old body on top of a great big horse, a gallop is pretty fast. Yesterday, her horse decided since she liked to gallop so much, he would gallop when she wasn't expecting it. And my Bean fell off. Luckily it was kind of a slow slide down the side of the horse, and she landed fairly flat on her back.

Once she calmed down and stopped crying, we confirmed that nothing was more than bruised. Then she asked to go home. One the way home, Bean said she was done with riding lessons. For good. But an hour later, as she sat in the bathtub getting hay out of all her nooks and crannies, she decided she would go to riding lessons again next week. She would get back on the horse.

Last Saturday, I ran my fifth marathon. I was excited and nervous. It was a course I hadn't run before, other than on one long run a few weeks before. And while my official goal was a sub-4:00 marathon, I secretly (or maybe not so secretly as my pace became faster and faster over the past few months) wanted to BQ, which meant a sub-3:40. I knew it was a possibility based on my long run times. But I was also scared to let myself really want it.

Things didn't go exactly as I hoped on race day. I was on target to get under 3:40 at the half. And still had it in my sights at mile 21. But the last four miles were tough. My stomach was upset; my neck was stiff and painful; it had rained the entire race, which made me so cold I couldn't feel my fingers enough to get my salt tabs out of my pocket or to push the little button to change the song on my headphones.

Before the race, my husband contacted some of my closest friends, some of the most amazing women in the world, to find out what they would put on a poster to cheer me on along the course if they could. Then he and my girls made those posters and hung them along the course. 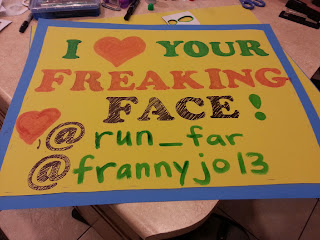 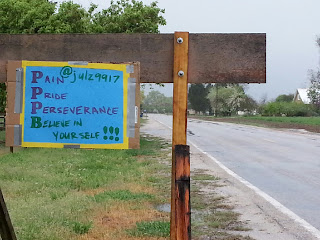 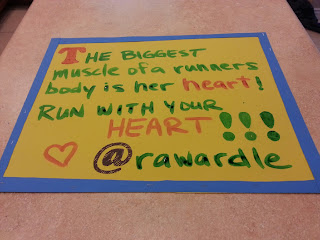 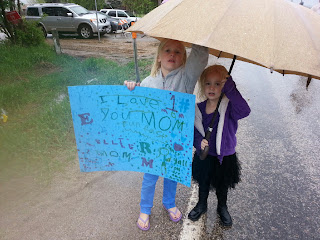 At mile 22, I saw one of those friends. And after she said exactly what I needed to hear and then went back to wait for her sister, she texted my husband and told him I was struggling. He went and took down one of the signs. This one: 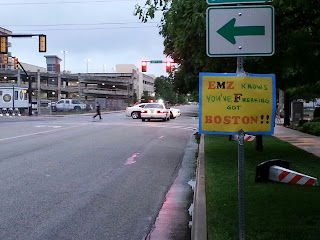 When I was sitting in my car after the race, convulsively shivering, he showed me the sign. I just broke. I was so overwhelmingly disappointed. And at the same time overwhelmed by the amazing friends and family I have supporting this crazy running thing I do. And everything else I do too.

I was in a funk the next two days. I'm not sure I will ever appreciate my PR from that race the way it should be appreciated. But I have picked myself up and am finding the positive. Because I believe in myself. I believe in the run.

Like my little Bean, I'm getting back on the horse. 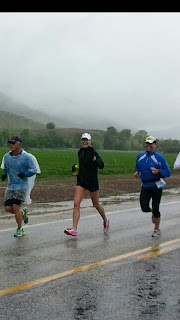