September 27, 2012
I had to look up how to spell "biatch." It just seems like there should be a double "e" or something in there. Adding an "a" to the original word doesn't really change the "i" sound. However, the Urban Dictionary says that's how you spell it, so that's what I'm going with.

However, the actual use of the word I'm talking about here was not biatch. It was the real thing. Directed at me. While running. And all I did was glance at a truck parked in an unusual spot on the side of the road, which apparently had a female occupant behind its tinted windows. Said occupant decided to scream the aforementioned obscenity at me just after I was past the vehicle.

Never a dull moment as a runner. I've had a few honks and whistles in the past, but apparently women have a different opinion of me when I'm running than men do. I imagined some confrontation scenarios, which wasn't very satisfying. But I'm not a confrontational person, so I just kept running. And then I thought about something I just read in Running the Edge yesterday:


Running is hard enough all by itself. The drive-by taunters screaming, "Run Forrest!" as you measure the road one stride at a time do not have what it takes. The millions who know they should run or at least exercise a little to take care of their bodies don't have what it takes. They cannot get off their couches or out the door for more than three consecutive weeks following a New Year's resolution. They cannot climb the mountain.

Just in being a runner, you have already succeeded in doing something many cannot. 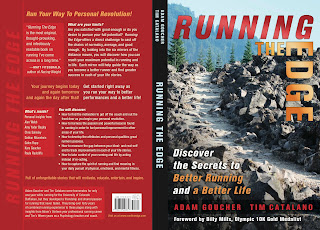 So take that you cranky old lady smoker chick in the beater truck on the side of the road. I have what it takes!