July 17, 2012
Worst. Race. Ever. At least MY worst race ever. The Glow in the Dark Half is not a race I will repeat.
First there were the issues with the race itself: a late start; a race official who rambled to the racers for more than five minutes about his credentials and the amazing feat that a marathon is (no one was running a marathon; it was a half and 5K); unorganized to the point that people didn't know they were supposed to be wearing timing chips because they had to be picked up just before the race started; no clear distance markers along the course; aid stations in the dark, which were unmarked and unlit; running in complete darkness, alone, in the middle of nowhere, for long stretches at a time; only pizza and water after the race.

Then there were my personal issues: stomach cramps the last half of the race; pulling over mid-puke on the way home (luckily the bag that my race bib and stack of race fliers came in was sitting on the passenger's seat); an incredibly sore back around mile 10 (which has never happened before); my Garmin lost signal about two miles in; feeling like we should have been halfway when we were only about 4 miles into the race; personal worst time for a half marathon.

It wasn't ALL bad though. I ran most of the race with Julia! It was one of her last Utah races and one of the last times I'll see her before she moves, so it was fun to see her and run with her. And before the race, Julia and I were interviewed by a writer for the local newspaper. 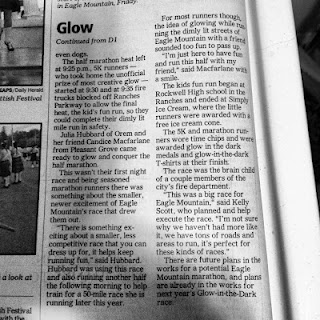 I just don't think night races are for me. I don't know if I overdo it physically during the day and can't figure out how to fuel and hydrate in the hours leading up or what exactly the problem is, but even as often as I run in the evening at home, I've had two miserable FAILS at my night races.

I'm just putting this one in the past and moving on because they all can't be great. And if I was going to have a bad one, I'm glad this was it.