June 27, 2012
It's time for some accountability. I can run until my legs fall off, but I'm not going to lose the weight that has been weighing on me for far too long (I'm hilarious) or get the tone abs I've been trying to sculpt for even longer if I keep fueling with Krispy Kremes (guilty of that offense this morning) and following my bowl of pears and cottage cheese with two snickerdoodles. Something has to give, and I'm determined it won't be the scale giving me yet another pound or two. So it's time to start keeping track of what I eat (again) and get back to making smarter choices and less excuses. Trust me; I'm a pro at giving myself a list of excuses and justifications for eating a custard-filled, chocolate-covered doughnut for breakfast. Obviously it's not in the picture because it's in my belly. 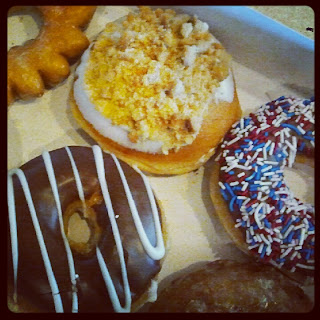 So, if you feel like following me and making me a llittle more accountable, my username at MyFitnessPal is ihaverun. The accountability starts tomorrow. I can't bear to see the number of calories I have already consumed today. Maybe after my run. But probably not.

In my effort to make smarter choices, I'll be adding things like this back to my snack line up: 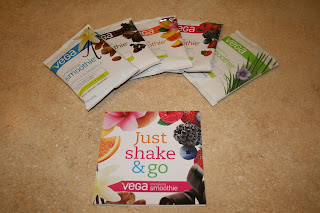 Vega sent me some Energizing Smoothies to try. I LOVED the vanilla almondilla. It was a hands-down favorite! The chocolate was good too. But I wasn't in love with the tropical tango or berry. That's not a surprise though, because I'm more of a chocolate and vanilla kind of girl when it comes to things like milkshakes too. There is also a natural flavor, which is great added to a fruit or green smoothie. I mixed all the different flavors with almond coconut milk. It is my new favorite thing and has made me a smoothie freak (until my hand blender died earlier this week - cue very, very sad music). 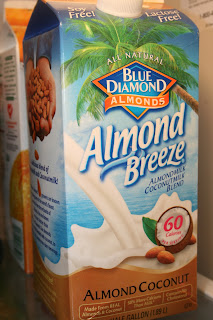 I didn't notice that I had an amazing amount of energy from drinking the Vega Enerizing Smoothies, but I definitely felt better about making it my snack choice in place of most of the alternatives. And the smoothies were great at keeping my hunger at bay between meals.﻿

So once my hand blender is back in business, I'll be back to downing smoothies again. Until then, I'll just try to stop after the pears and cottage cheese. If you have any other great snack suggestions, please share! I can always use some new additions to the line up.