Things I Love Thursday - Stuff Made Out of Oatmeal

March 29, 2012
Once upon a time, I ate oatmeal for breakfast every single day. Now, I eat it probably twice a week. I still like oatmeal, but it is no longer an everyday kind of food for me. There are just some mornings it doesn't sound good. But throw oatmeal in something else, like cookies or muffins, and I'm good to go on the oatmeal. So when I saw a recipe for Personal Size Baked Oatmeal on Pinterest (where else, duh?), I decided it was worth a try.

And it was soooo worth a try. I ate it for breakfast and lunch yesterday. And sometime mid-morning I finished the little bit of the Bean's that she didn't eat. Then it was my pre-run breakfast this morning.

The recipe topping suggestions were walnuts, chocolate chips and raisins. The chocolate chips were a must, the raisins...how about blueberries instead?, we opted for a pecan/brown sugar crumble instead of walnuts, and finally we tossed coconut on a few (thanks to The Princess's brilliant suggestion). 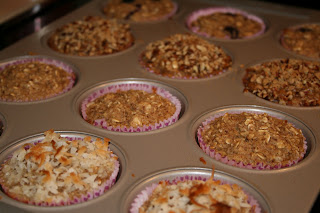 The chocolate chips are a hands down favorite for the girls, the pecan/brown sugar are my favorite, and the coconut was a hit. The blueberry are next on my list to try, but I'm sure they will not disappoint. 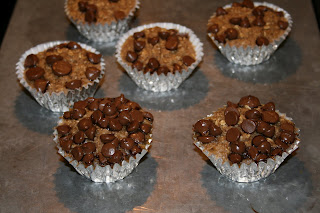 Can you tell which ones my little Bean helped with?
Some things I learned from making these:

So if you like oatmeal, head on over to Sugar-Free Mom's Blog and print out the recipe. Or head over to Pinterest and pin the recipe for later. Happy oatmealing.