September 12, 2011
The timer will go off in five minutes for the zucchini bread baking in the oven. So why not blog for five minutes?

Plus, I need to do a quick race report, even if it's mostly for myself. Saturday I ran the Spanish Fork Half Marathon, a smaller race about 30 minutes from my house. I signed up for it to get my fourth of four races I needed to complete Run the Slam. Here is my race report in the form of some random thoughts: 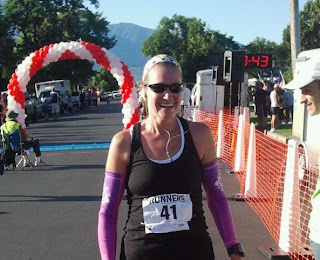 (Why can't I look normal even when I stop running??)


I can't remember if I blogged about it or just mentioned it on DailyMile last week, but the front of my hip has been bothering me lately. It doesn't hurt when I am not moving my leg, but is quite painful sometimes if I have been sitting or standing still for a while. I am leaning toward a nerve issue because of where it is, how it feels (hot, tingly, and sometimes shooting into different parts of my quad) and how it comes and goes. I tried several different anti-inflammatories that did NOTHING to help. But my Celebrex has been a life-saver.

My hip didn't hurt much the day before the race, but it was pretty sore for the first three miles of the race and then it either stopped hurting or went numb. Either way, I was glad it was gone. It hurt a little after the race, and then I had the hubs pull me up from sitting on the floor later that day and took a huge step that made it hurt A LOT. Since then, it has been pretty sore. I'm giving it a few days off from running before I give in and go to the doctor. Fingers crossed it subsides with a little TLC and a lot of icing.