Only Half Crazy: South Valley Half Marathon Race Report

August 23, 2011
We've been packing in the fun these last few days of summer before The Princess starts kindergarten next week. Bean started preschool today and said goodbye this morning without any tears. Probably good or I might have lost it. But it was fun to spend a little time with just The Princess, since that doesn't happen very often.

Anyhow, as far as running goes, I managed to pace the 2:15 group at the South Valley Half without any notable incidences or accidents, so I am considering pacing again in the (possibly near) future. The course was off a little, so when I thought it was going to be short 2/10ths of a mile, I slowed down. I was worried I would finish two or three minutes early, based on my time, and the goal was to be within a minute of the pace time. When I passed the mile 12 sign, it still looked like the course would be short. But when my watch hit 13.1 miles, I still couldn't see the finish line. When I finished, my watch said 13.23 miles, 2:16:44. Most of the other pacers ended up with similar results, so I tried not to be too disappointed in the result.

In spite of it getting warm towards the end and a tough course with 3+ continuous miles of uphill (I just told myself the hills were good practice for St. George), I had a lot of fun and would certainly do the race again. It was a smaller race than the last few I have done, so it would be fun to see how I could do if I really ran it.

As far as pacing goes, it wasn't too bad holding the sign the entire time except in the last few miles when it got windy and my thumb got tired from holding the sign so it wouldn't hit me in the head. But the sign also came in handy to block the sun during a lot of the race. I was a little worried about wearing a shirt I'd never worn before, but I didn't notice it at all. And the bright yellow made it easy to pick me out in the race photos.

I changed back into my own shirt before I took pics with Blaine (who is off the hook since I didn't crash and burn) and Whitney (an awesome blogger who won her race entry through my blog), otherwise Blaine and I would have been twinners in this pic: 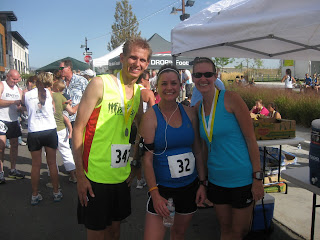 I have to say this race has one of the COOLEST logos. Both the medal and the shirt are awesome! And thanks again to Aly for letting me be a part of such a great race. 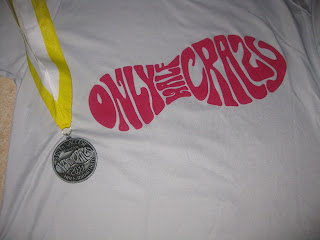