July 13, 2011
Yesterday after I ran three measly (and way too hard for three) miles, The Princess wanted to go for a walk. She has been asking for a few days when we can go for a walk, so we decided to finally make it happen. The main reason for the walk? So she could push Emerson, her doll that she treats like a real baby and takes EVERYWHERE, in her stroller. So of course Bean had to push her doll in a stroller too. 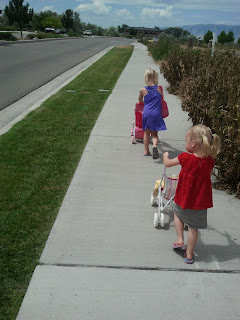 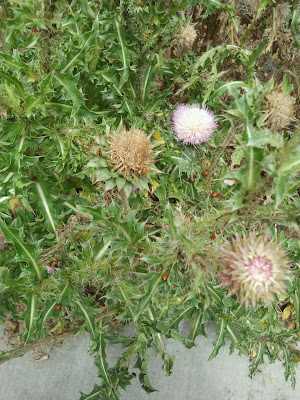 This picture doesn't do justice to how many there actually were. But if you look closely, you'll see a few of them doing something that A LOT of them were doing. I don't know if it is ladybug mating season or what, but there was some serious loving (or piggyback rides if you are under the age of six) going on.

We made sure to let Bean know ladybugs are good bugs. We've had to do that with rollie pollie bugs too. Otherwise she sees a bug and automatically steps on it. Or brings it to me. Three times in one week, Bean came up to me, said "here Mom" so I would hold out my hand, and placed a bug in it. I don't hold out my hand anymore when I hear the words "here Mom." The Princess however doesn't even want us to step on ants because they are "little creatures."

So that is how I got over my craptastic three miles. Ladybug watching.

I didn't however have to get over the 15 miles I ran on Saturday. I started from home and planned where my family would come pick me up later that morning. My IT band started bothering me around mile ten (it NEVER bothers me on the treadmill, thus the effort to do more outdoor runs and get my IT band used to the difference), so I couldn't have been happier when I saw my little family standing next to the trail about two miles later. It was the perfect surprise at the perfect time. They gave me kisses and love, and off I went no longer thinking about my leg. Then I saw them again just as I hit 14 miles. My IT band was on fire, and I was tempted to hop in the car and call it good, but I decided I didn't want to be a quitter with a single mile to go. So fueled by seeing my favorite people again and knowing I would climb in a cool car with them in less than 10minutes, I finished it. And finished strong. It was my fastest mile of the 15! Eventually I will plug in my Garmin and find out exactly how fast, but not right now. So just take my word for it.

And Monday, I started my weekly addition of 1 mile barefoot. This is supposed to help prevent lower leg injuries. And since my right shin and calf act up sometimes on the treadmill (but never on outside runs of course), I figure I'll give it a try.