I Should Probably Tell Bono He's My Child's Godfather 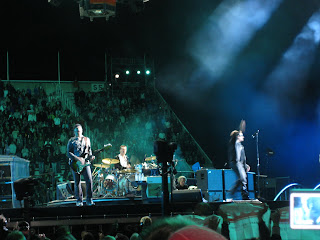 I am very tired today. But very happy. Every lost moment of sleep was TOTALLY. WORTH. IT. And who knew so many of you are fellow U2 fans? Maybe not fans like I am a fan since my blog title is taken from one of their songs, my dog's middle name is Bono, and I claim Bono is my daughter's godfather since she went to two U2 concerts while in the womb. But really, how could anyone not be a U2 fan?

I've had tickets to this concert for almost two years, so I have been waiting for this for a long time. But it was worth the wait.

Now in my half asleep state, I'm here to share some of last night's highlights with you. And wouldn't you know...there is even some running/blogging related stuff in here.

The Fray was great. You can't be a Grey's Anatomy fan and not like them. They are a surprisingly cute bunch of guys, even in their skinny jeans. And it made me feel better to find out the lead singer is 30 since he looks much younger. Not sure why it makes me feel better, but it does. 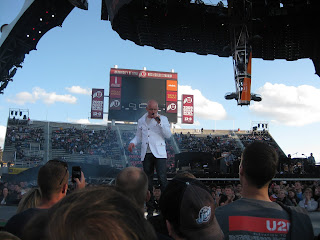 Then while we waited for U2 to start, I saw this. It made me smile and think of all of you. 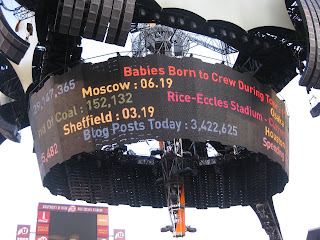 Someday I may be too old for general admission, standing only tickets. That day is not today (or technically yesterday). There is nothing like being that close to the action. And while I didn't see any of Bono's crotch sweat like I did at their last concert (5 years ago when I was preggers), I think it's just because he was a little more mellow this time around and didn't sweat as much. Or maybe one of his buddies is a runner and introduced him to some amazing, breathable fabric that he's having his pants made of now. 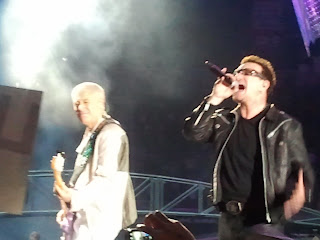 Some other things I realized last night:

And just so you know I was really there and didn't steal all the pics/video off the Internet, here is my post-concert happiness (with the hubs and my brother and his beautiful wife). 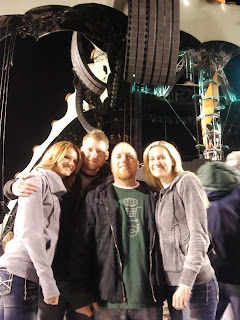