March 03, 2011
Monday I tried out the P90X Core Synergistics after a short 3-mile run. When I finished, I wasn't too tired and didn't suspect I would be too sore. I don't know if it is because it works such a large group of muscles, but I just wasn't sure it was going to do its job. I was wrong.

My inner thighs hurt the day after, I didn't even really remember doing much to work them. I felt a little soreness in my glutes during my Tuesday run. And my abs are still a touch sore today, three days later. I think I'm going to be revisiting that P90X workout often.

I didn't end up running yesterday because The Princess had a program at school so I spent my usual running time making myself presentable to be seen in public. Then nap time was spent getting caught up on some work. I will run today though, even if it means I don't get around to cleaning the toilets until midnight.

I did get some crosstraining in already today though. I spent an hour with my girls at Jump On It, a giant warehouse of trampolines. We played tag and crack the egg and took turns doing as many tuck jumps (one of The Princess's gymnastics moves) in a row as we could. We just might have to make this a weekly thing! 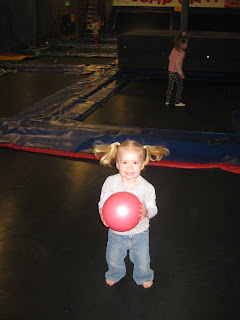 What is your favorite type of "creative" crosstraining?