November 01, 2010
I had a request today to run with my girls. The Princess wants to look for grasshoppers. Last week, we saw dozens of grasshoppers during a run, and then The Princess found one in the backyard the other day and asked me to catch it in a jar. So I did.

My girls were fascinated and entertained by the grasshopper for hours. The Princess named it Avrie Hallie Emma Sophie Gracie Candice after her favorite friends at school (and me!); her dad suggested we call it Hopper for short. After Hopper spent the night with us, I suggested we let Hopper go (after seeing how much poop – at least that’s what I think it was – a grasshopper could produce in one night). After some initial resistance, I told the girls Hopper’s family was probably worried about him/her, and they decided to set it free. So today we will venture out to find another grasshopper or two that would like to spend the night at our house (and experience some mild torture as the girls press their faces against the glass and constantly shake it down when it tries to climb up the side of the jar).

The upcoming grasshopper hunt/run is much needed after the weekend of Halloween cookies and candy. I’m not a fan of scary, bloody, gory things, so Halloween isn’t my favorite holiday. Why can’t everyone dress up in happy, warm, cuddly costumes? That’s (kind of) what we did at our house. And it is quite remarkable that everyone at our house donned a costume this year. It is the first time the hubby and I have dressed up on Halloween since we got married (and probably many years before that as well). The girls' and hubs' costumes were more specific while mine was kind of generic but still fun. Can you tell who we all are?? 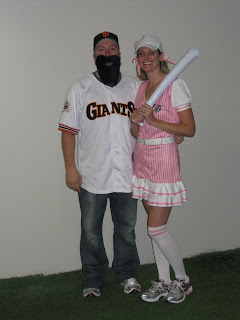 Hope you all had a great Halloween! Now onto the holidays I do LOVE.