September 28, 2010
With the countdown clock ticking away, it's time to talk about one of the most important parts of marathon preparation - what to wear.

I did a test run of my planned marathon apparel yesterday. I actually bought a new running skirt about a month ago to wear on race day. This is my fourth Running Skirt, but it fits differently than the other three. That would be fine, except the difference makes it ride up in the back. I get this little bunch of fabric above my booty and it makes the already short skirt reveal a little too much on the back end. Have any of you Running Skirts fans had this problem? I love my other running skirts and have run most of my races in them, but I'm not thinking my newest one will be featured in any race pictures. I'm sure it would provide some entertainment for the few runners that would be behind me, but I just can't spend 26.2 miles tugging my skirt down and wondering how many people got a look at my butt cheeks. So I decided to go with these capris:

In fact, that is the exact thing I had in mind to wear (original, huh?), other than my newer pair of Sauconys. Then I saw the weather forecast. It is going to be warm, so I might want as little touching my body as possible once the temps start inching up past that 70 degree mark. So I'm rethinking the running skirt option, only one of my others. I guess I'll pack both the capris and the skirt and force myself to make a decision on Friday night.

I am also wearing my SPIbelt for the first time during a race. I have only worn it on long runs. I always just stuck my gels in my running skirt pockets during races. This time I am taking Honey Stinger energy chews along and they take up a little more room, so the SPIbelt it is. I went back and forth between using it or my handheld water bottle, but I decided I don't want to hold anything in my hand for that long. Plus my SPIbelt has room for some toilet paper and Imodium, so it's all good. 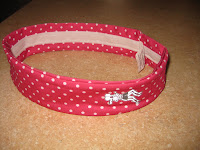 Last but not least, I will be wearing one of the headbands I found that don't slip. I actually had a lot of luck when it came to finding something that works. I didn't try a Bondi Band, in spite of numerous recommendations. I just can't picture myself in something that wide. I did, however, try Sweaty Bands, a TMB Endurance Band, a headband from Jogging Stroller Mama Shelly, and a Running Skirts headband. Honestly, the first three were almost identical. Sweaty Bands are the most expensive but have a lot of color options and are obviously professionally produced. My favorite though is the one from Shelly. It is a sentimental favorite, but it also fits perfectly and is well-made. The Running Skirts headband is a little different. It is also a non-slip band and fits great. The strange thing is that I can't find it on their web site. The headbands they have for sale now look just like Sweaty Bands. They are also priced similarly, so there isn't much point in going into detail about the one I have. The headband I will be wearing on race day is the TMB Endurance Band because it matches all the things I am considering. It is all white, and since I will probably be in a bright orange shirt until I get too warm, I can't bring myself to wear any of the others that are all some version of pink. 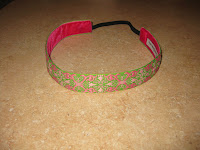 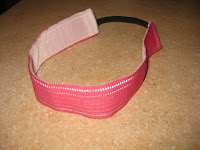 So with that important bit of information out of the way, I'm going to do some laundry so I don't start the race smelling like I should at the end of the race.


RUN: Also on the pre-race to-do list is updating my iPod. Any song recommendations??