Rockin' My Socks and Shoes 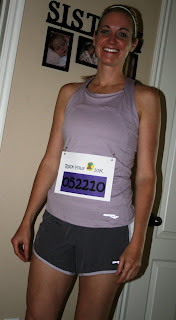 Saturday I ran the Rock Your Socks (Virtual) 10K. I ran my "race" on the treadmill while my girls cheered me on. It wasn't a typical run for me because I was testing out new shoes. I tried three different pairs, two miles in each. Also, because this was my "long" run, I wanted to keep my pace a little slower and went with how my legs felt. I also found that when I went faster, I paid less attention to how the shoes felt.

My midge had a definite shoe favorite, insisting these make me "speedy":

She was also a fan of the (Brooks Launch's) bright yellow with purple laces. The color scheme took some getting used to on my part, but they were my favorite on my feet so they are keepers. I am also keeping the Mizuno Wave Rider 13s. It was tough deciding between the Mizunos and the Asics, but the girl at the store suggested I keep the Mizunos if I couldn't decide because the Asics and Brooks are very similar and the Mizunos would be a good change for my feet and legs since I would be alternating between the pairs.

While I was tearing it up on the treadmill, my cousin ran her first 5K on Saturday. She rocked it in 30:31. She was shooting for under 45 minutes and just killed it. This is the cousin that watched my girls during my last few races. I'm hoping we can run something together soon! I thought about stealing her post-race photo off Facebook, but I'm not sure she would appreciate that. However she looked like she didn't even break a sweat in all the photos. I'm thinking she might be the new Runner Barbie.

In non-running news, my little Rowdy boy walked up to me yesterday morning looking like this: 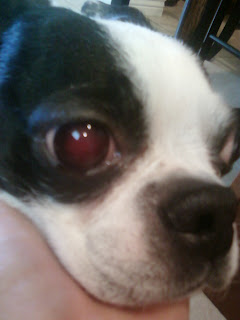 Because he has cataracts in both eyes and is high-risk for glaucoma, I was pretty concerned. We spent the afternoon (and $600) at his eye doctor's office. After an ultrasound and several other tests, we went home with a detached retina diagnosis and five prescriptions. His vision was already somewhat limited in that eye, but now it's completely gone. The retina may reattach by itself, but there are no guarantees. Either way, we'll just keep doing whatever it takes to keep the little guy happy and healthy.

Now I'm off to get my girls geared up to play in the snow. Last night we talked about going swimming today, but the plan changed when we woke to over an inch of snow on the ground.

Wednesday is a big day 'round here so be sure to check back!

RUN: Put together my marathon training plan over the weekend. Training officially starts June 14th, the week after my half marathon.