First, farkles = freckles. Second, I think she got the idea from a recent episode of Sesame Street in which Abby Cadabby's freckles become sparkle freckles.

I'm sure my midge was disappointed and may have even thought I am a "mean mom" (her new favorite thing to tell me) when I told her I'm sorry but it is my job to do my best at keeping her from getting freckles (someday she'll thank me, right?). She has one little freckle on her foot, so she'll just have to be happy with that.

I think I'm doing a pretty good job in the freckle prevention area. My girls left Hawaii just as white as they arrived. My baby has such pale skin (I call it porcelain because it just sounds better) that when I put a pale pink and cream striped bathing suit on her, my hubby said he couldn't tell where her skin ended and the suit began. When I put sunscreen on my girls before our run today, my oldest midge didn't bat an eye. She just stood there and waited until I was finished. My little one squealed for a second then gave up and went limp until the ordeal was over. My oldest midge freaks out if we go anywhere outside and she doesn't have sunscreen on. I have sunscreen at home, in the swimming bag, in the glove box and in my diaper bag.

My hubby calls me "The Sunscreen Nazi."

I take pride in the name. I haven't always been this way though. The millions of freckles on my back and shoulders are proof. It wasn't until I got older and wiser that I started buying sunscreen in bulk. I once believed I looked thinner with a tan. Now I believe I look thinner when I look thinner.

I guess my point here is that I hope you all remember to lather on the sunscreen. It seems kind of contradictory to get out there and run in an effort to be healthy without it. I'll get off my sunscreen soapbox now.

Like I mentioned above, I went for a run with my girls today, 6.56 miles pushing the double jogger. We broke it up with a stop at a park about halfway. 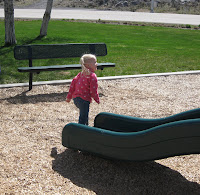 I planned on seven miles, but apparently the road that runs next to the trail (where I predetermined our route) is a little longer than the trail. It was so nice to be outside and my girls loved it. In fact, the only reason I attempted a run this long with them (my longest jogger run yet) was because they were so happy during the 3.5 miles we ran together yesterday.

RUN: Whenever the G-man would beep, hearing: "Mom, what is your watch telling you now?"