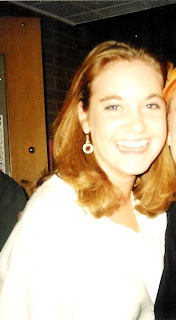 This is a somewhat forgiving picture. I had another one in mind that I wanted to share but gave up looking for it after 45 minutes (my "fat" period was pre-digital). I didn't look like that when I started running, but remembering how I felt when I did look like that is one of the reasons I run.

My first year of college, I gained that dreaded freshman 15 and then some. I spent the next few years hating the way I looked but doing nothing about it. I finally joined a gym but never ended up going because I felt like everyone was looking at me and I didn't really know what I was doing. I got to the point where I really wanted to do something about the way I looked and felt though. About that same time, I had a roommate that knew how to eat well. She also introduced me to Karen Voight workout videos. By that time, I was about 25 pounds (probably a few more even) heavier than I am today. Halfway through my last year at college, I started changing my eating habits (no more cooking and eating a pan of brownies at 11 pm; no more Taco Bell runs at 2 am; more water, more fruits and veggies) and started shutting myself in our condo basement with Karen Voight. By the time I graduated, I had lost over 15 pounds.

It wasn't easy. I remember going to the movies and wanting to cry because my knees were so stiff and sore (from working out) when I stood up. But I also remember the first time I noticed the definition in my legs and when I could get back into some bright orange "Daisy Duke" shorts (yes I'm old) from high school. Over the next year, I lost another 10 pounds. When I got married, I weighed a few pounds less than I weigh today.

After losing the weight, I became certified to teach aerobics and yoga. I usually taught 3-4 classes each week and hit the bike or elliptical trainer before or after a couple of my classes. When we moved to New Jersey for my husband's schooling, I stopped teaching but spent several hours a week with Karen Voight or in our apartment's gym.

I became pregnant in 2005 and continued to work out pretty regularly through my pregnancy. I had my first daughter in March 2006. After about six weeks, I started doing workout videos at home. Then in June 2006, my cousin asked me to do a 5K with her. From the moment we signed up, we planned to walk since I would be pushing my baby in the stroller and running wasn't my thing. As we walked that 5K, I watched all the people running, especially the ones pushing their little ones in strollers.

As we crossed the finish line (at 45:58), I realized I wanted to try running that race again the next year. I'm still not sure where that came from since I had ALWAYS hated running. In fact those 1-mile tests they used to make you do in P.E. were my most dreaded days. But I still decided to give running a try.

I started slow and there was a lot of walking at the beginning. One of the things that kept me going was that it was something I could do WITH my little girl. Over the next few months, I bought a jogger and a treadmill.

I ran the same 5K the following June, only this time I crossed the finish at 31:20. I think that might be the day I became a runner although it would take a few years before I started to call myself one.

Gaining weight and then losing it (the right way) taught me things that I couldn't have learned any other way. There are still things I would change about my body. I am holding out hope that I will eventually run my way to thinner thighs. And my stomach has this weird thing going on since having my babies; I can't decide if it's cellulite or loose skin or what (but it's what keeps me from wearing a bikini). Even with the things I would change, I have learned to love my body.

And having my girls helped me love and appreciate my body even more. Not just the amazing thing that is pregnancy, but looking at those two little people and hoping they have positive body images and grow up loving who they are, inside and out. I can't hope for that if I don't set the first example. What they take out into the world starts at home. 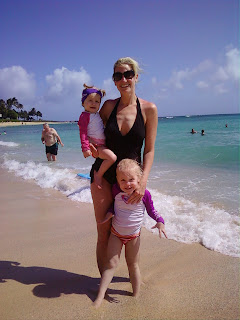 When we were looking at pictures after we got home from Hawaii, I told my husband it was the first time I have ever looked at pictures of myself in a bathing suit and not hated what I saw. Admittedly running has helped tone some areas, but I don't look that different than I did in a bathing suit before I had kids or even pre-weight gain or post-weight loss. The difference isn't how I look. It's how I look at myself.